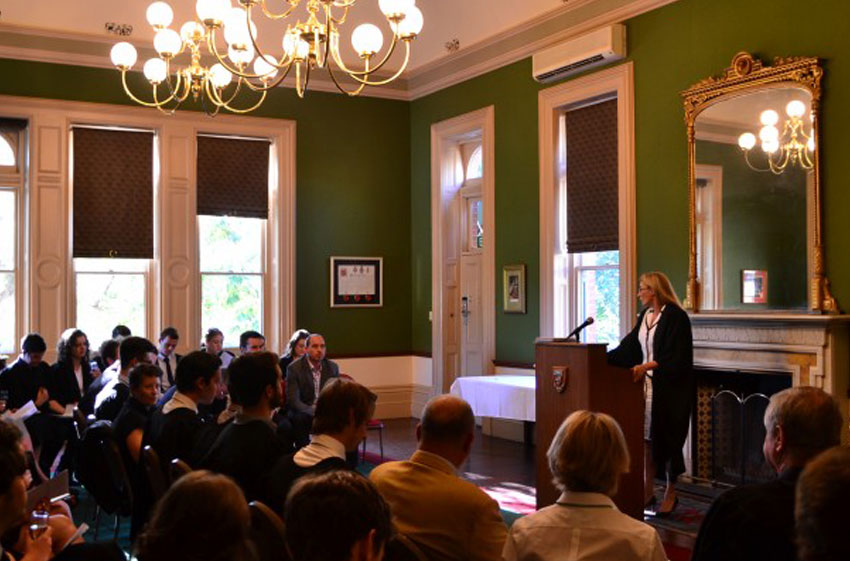 In our first Academic Prizes Ceremony for 2019, St Mark’s College celebrated our returning students who received outstanding results in the 2018 academic year. Over 60 students were acknowledged for their outstanding academic performance.

Academic success is a core element of College life, and as such it was fitting for our Collegians to be celebrated in front of their peers at Formal Hall. Nearly 95 years ago, the College’s founders believed in the benefits of a collegiate education – of university students living and learning together in a residential academic community in which they could take part together in enriching and broadening activities of an academic, intellectual, cultural, sporting, spiritual, service, and social kind. Whilst students today are very different to those 95 years ago, this core mission of learning and enrichment remain. The College works hard to give every student the best support we can to achieve their full potential in all aspects of their life. The students we acknowledged at this ceremony are outstanding examples of the very best a Collegian can be. They are students who have embraced College life to the fullest, combining academic success with a full collegiate life. These include our College Club President and other members of the College Committee, our Residential Advisors, both Head Residential Advisors and Assistant Dean, our academic tutors, sports captains, and our Charitable Foundation executive members. We are proud of all our students for their academic achievements.

The following is a full list of academic prizes awarded in this ceremony, congratulations to all students.

The Edward A Radcliff Scholarship.  This is a prize that was established for a student with the best academic performance in a previous year by a returning student.  It was established in 1953 after the death of Edward Radcliff who left money in his will for St Mark’s, St Barnabas College and the Anglican Board of Missions.  In 2019 it was awarded to Alasdair Leslie. Alasdair is an outstanding scholar and maintained a high distinction average for the first three years of his medical degree.

The WF Werhstedt Prize can be traced back to the Council meeting of 14th February 1939 where a legacy had been left to the College by the Reverend WF Wehrstedt for the purpose of founding a prize for a scholar in the Arts and Humanities.  This prize was awarded to Hannah Bradshaw.

The BP Wait Prize dates back to 1939 and was named after long term residential tutor Mr Wait, who lived at the College in the late 1920s and 1930s.  It is for study in the classics or modern languages which were the subjects that Mr Wait taught and the prize goes to Beth Leese.

The WA Collegians’ Prize was established in 1965 by Josh Reynolds – first Rhodes Scholar of St Mark’s and President of the College Club – marking an end of an association with the West Australian Medical Students after the UWA Medical School was established. In 2019 this prize is awarded to Nicki Bakaj.

The St Mark’s College Prize for Outstanding Overall Academic Performance in 2018 was awarded to April Catford and Roan Gillam, who both achieved GPAs over 6.6.

The St Mark’s College Prize for Engineering. Computing Science and Mathematics was awarded to Benjamin Cmrlec

Commendation for Exceptional Academic Achievement: Awarded to students who achieved 5 or more High Distinctions in 2018

Commendation for Outstanding Academic Achievement: Awarded to students who achieved 3-4 High Distinctions in 2018

Merit Certificate for Academic Achievement: Awarded to students who achieved 1-2 High Distinctions or 5 or more Distinctions in 2018