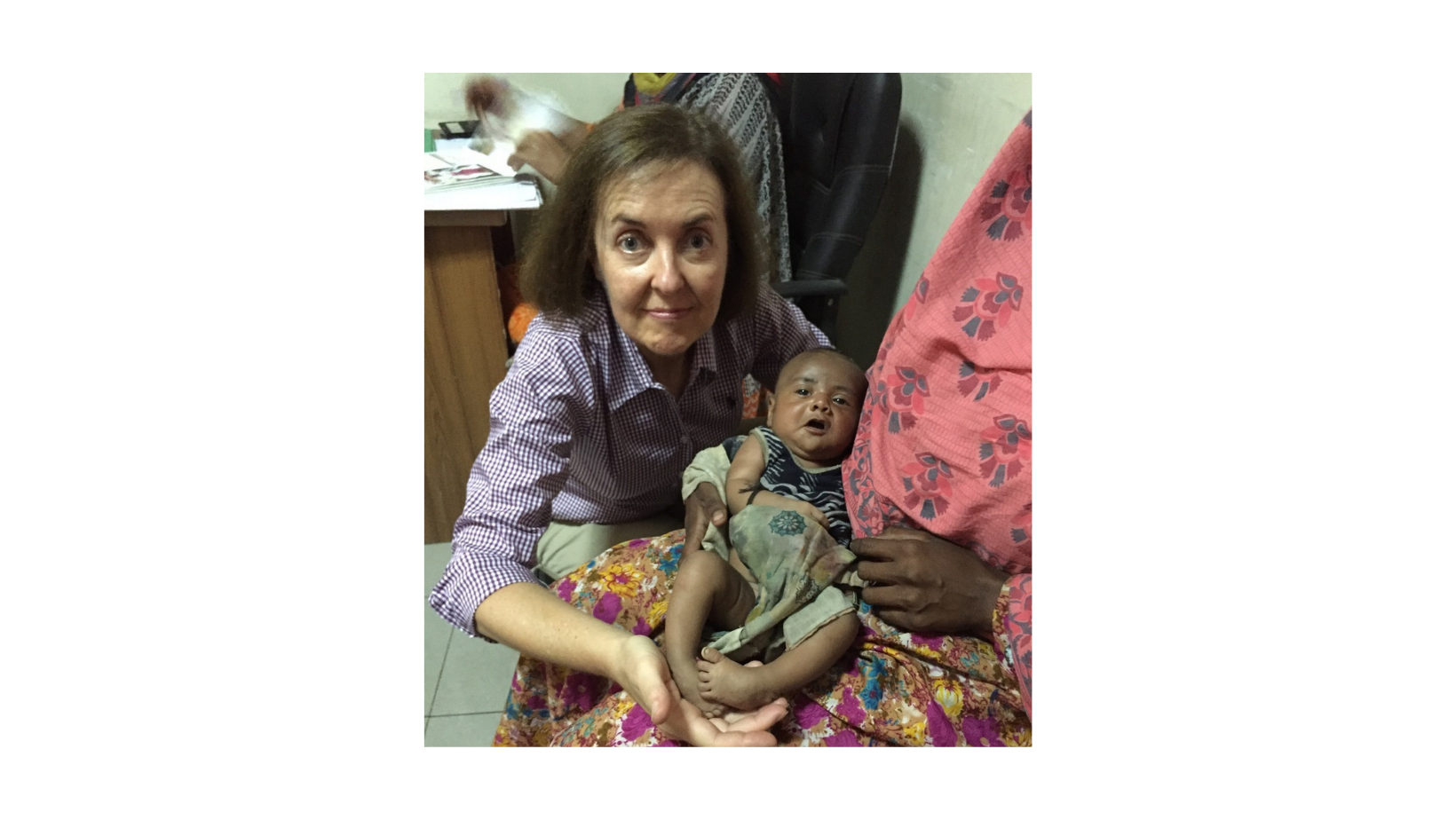 Dr Angela Evans, one of the first women students to enter St Mark’s in 1982, has had an outstanding career through her clinical, academic, and service work in podiatry, which has had an international impact. She has combined this with other extensive community service, including a total of nearly 20 years in governance roles at St Mark’s College. It is no wonder that she has been described as “the living embodiment of the values of community service and generosity for which St Mark’s College stands”.

Raised on the long-time family property near Eden Valley, Angela remembers her upbringing as one in which the pattern of community service was central. Originating from both bankers and South Australian pastoralists, Angela attended a rural kindergarten and two small rural primary schools before moving to Adelaide as a boarder at Seymour College.

Her enthusiasm for service was well fostered by Seymour College, and Angela arrived at St Mark’s College in 1982 alongside 24 other women in the first year of coeducation. Looking back 40 years later, Angela says that “arriving at St Mark’s remains one of the best times of life”.

“In comparison with an all-girls school, living in an adult and far more varied community was enormous fun. The other women were an extraordinary group, and we loved the mix of nationalities, backgrounds, intellects, and humour that surrounded the beginning of our university educations. The 1982 men were equally good. I distinctly remember the solidarity I felt on university campus wearing a college rugby jumper, as from day one, everyone from St Mark’s would say hello – a great entrée to collegiality.”

It is safe to say that Angela seized the opportunity at hand, with The Lion recounting her “unsinkable optimism”. Reflecting the high regard in which she was held by her peers, as well as her lifelong commitment to service, she served on the Buildings and Grounds Committee in 1982 and the College Club Committee in 1983, and as College Club Secretary in 1984.

Angela warmly recalls her final year, when she “shared the old Abel Cottage, where we had a filtered coffee machine, watched M.A.S.H. after dinner, and I drove a Datsun 1600 - the greatest of times”.

Undergraduate years finished with a Bachelor’s degree in Applied Science (Podiatry) from the South Australian Institute of Technology (now the University of South Australia). The completion of her undergraduate studies marked the beginning of a career of prolific and renowned scholarship – one which Angela would put to remarkable use.

In the years immediately after leaving St Mark’s, Angela worked in hospitals in South Australia and New South Wales treating diabetic foot disease, and specifically averting limb amputations. This was followed by studies in the US and UK, and then joining a private practice back in Adelaide.

Having completed her PhD in 2005, Angela was enlisted by the International Red Cross in Vietnam to initiate national clubfoot training. In 2008, Angela was enticed to Bangladesh with the NGO “Walk for Life Clubfoot" for just one trip. She remains the volunteer research lead, with the project now treating some 30,000 little children, enabling them to walk, go to school, and have a normal life. Regarding this achievement as the pinnacle of her professional career, it is unsurprising that Dr Evans received the “Excellence in Delivery of Primary Health Care” award from the British Medical Journal (BMJ) South East Asia for her leading involvement.

Today, the learnings from these efforts are taught by Dr Evans in the University of Oxford Global Clubfoot Initiative. This is, however, just one of Dr Evans’s many academic roles. She is an adjunct Senior Lecturer at La Trobe University and a visiting professor at the University of Barcelona, and has taught extensively elsewhere, including over some years in Russia.

Along with her clinical and academic roles, Angela has – amongst much else – been part of the medical teams for the Sydney Olympics, the Melbourne Commonwealth Games, and the Special Olympics in Nagano and Adelaide.

Her remarkable contributions were deservedly recognised in 2019 when she was made a Member of the Order of Australia “for significant service to community health in the field of paediatric podiatry, and to professional standards”. This honour was made all the more significant by the attendance of her 90 year old mother at her investiture at Government House, Adelaide.

Naturally, Dr Evans is excited about her future endeavours. Active in many Anglican activities over many years, she is currently a director of AnglicareSA where she is seeking to build support for unfunded projects addressing domestic violence, children experiencing grief and loss, emergency assistance, and young people leaving foster care. She is also a Board director of the Australian Podiatry Association where she works with UNSW’s sustainable materials research engineers on a “Green Podiatry” initiative, to recycle foot orthoses, avert landfill, and use this project as a healthcare example for the federal government to build upon.

Dr Evans has written: “I am very grateful for my years at St Mark’s, and for the collegiality and friendships which are given and lifelong. Growing into young adulthood and commencing university education amid a community where one belongs, is a tremendous privilege. I look back on 1982 with fondness, considering myself most fortunate.”

Dr Evans has devoted significant time to ensuring future generations receive the same access to opportunity which she and others did. She served as Treasurer of the Old Collegians’ Association from 1991 to 1994, the College Council and Board from 2006 to 2018, and the new College Board from 2018 to 2020.

Her service in these roles for a total of nearly 20 years is outstanding, and the College is most grateful for her distinguished service.

A brief Q & A with Angela Evans:

What are your most significant memories of your time at St Mark’s?

I think that collegiality enhances collaboration, cooperation, and the ability to stand one’s ground. The dining table is a good place to listen, to appreciate others’ perspectives, and to enjoy both the humour and reality of a different point of view.

My parents told me to “enjoy myself and my university days” – great advice, which I would reiterate.

Georgia Blain – one of our 1982 women, a brilliant novelist, who died too soon. Our last conversation was 10 years ago, about her first novel Closed for Winter. I wish I could tell her how much I enjoyed her extraordinary Between a Wolf and a Dog. RIP Georgia, and you honour St Mark’s Dining Hall.

Effie Adrienne – another 1982 woman, originally from the Seychelles, and now living in York, UK. An intelligent, thoughtful person, a scholar of French-Creole, with a wonderful, original French-Anglo attitude.

(- and if we could include Joanna Lumley, that would be perfect!)

Which books would you recommend we read as Collegians before graduating from university?

Lead image: Angela Evans with Walk for Life Clubfoot in Dhaka, Bangladesh, in 2015 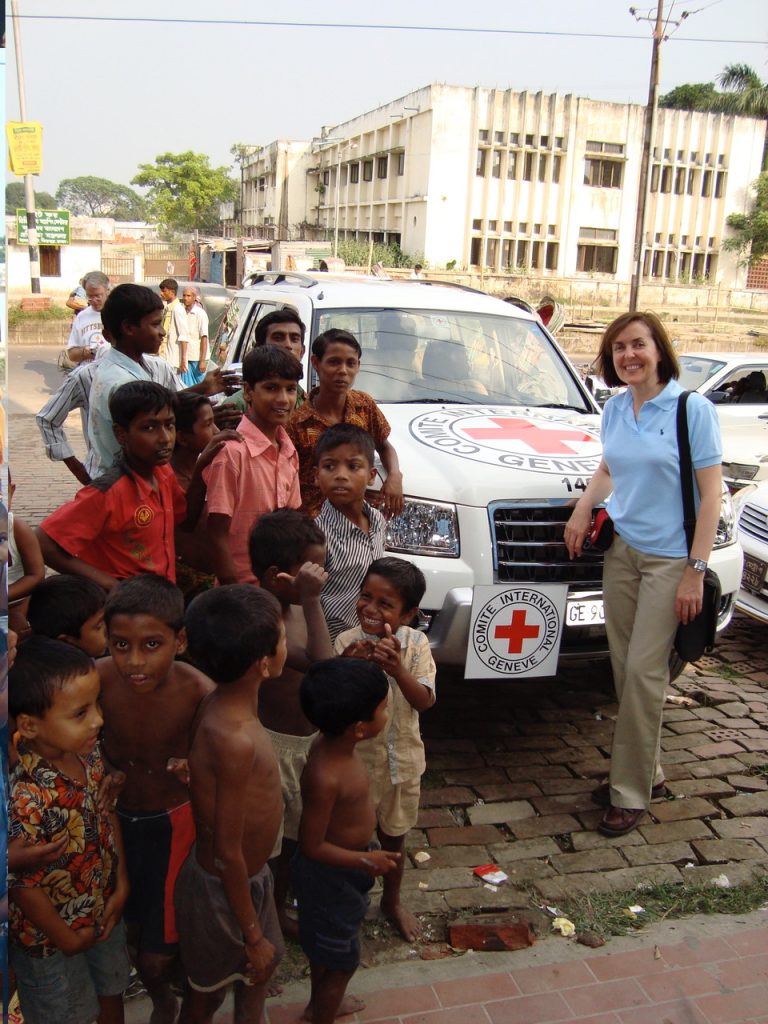