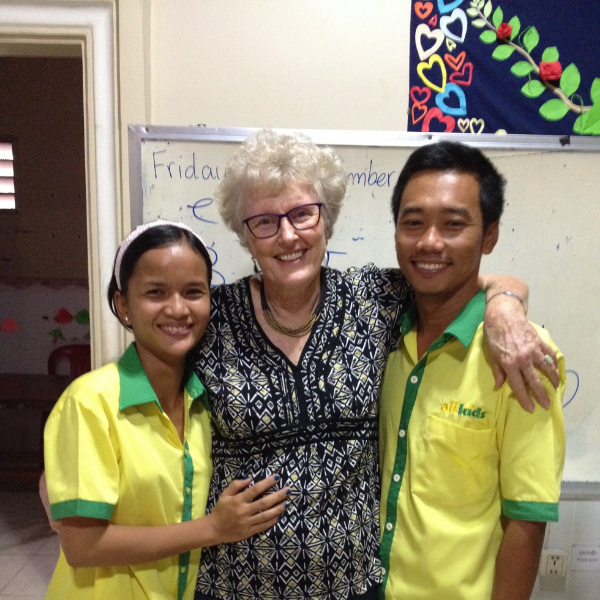 Gail brought to this work her belief in the benefits of coeducation and her enthusiasm and insights as a long-term teacher of biology in her native South Africa and in Australia - a career which combined her commitment to creating educational opportunities with her lifelong and continuing passion for nature.

Gail Roediger’s first connection with St Mark’s came through her son, Anthony Roediger, who came to St Mark’s in 1990 as one of the first C.A.S. Hawker Scholars, and later went on to Oxford as a Rhodes Scholar. Gail’s younger daughter, Jessica Roediger, also came to St Mark’s as a Hawker Scholar in 1997. Gail regarded her own service on the Education Committee and Board as a “giving back” for all the College had done for her children.

Born in Johannesburg in 1945, Gail attended school at Kingsmead Girls College, matriculating in 1961, at a time of growing tensions in Apartheid South Africa. She was deeply aware of the inequities and divisions in South African society, including in education. Her private school for white girls gave “a true liberal education involving a broad range of subjects”, with little drill or spoon feeding, and “truth was pursued in the purest terms”. She writes, by contrast, that “during my schooldays, 1950-1961, Black schools existed. They were situated out in the Black townships. Once every few years we were taken out in the school bus to a black school. The children would sing for us and we would give them oranges and tinned food. We came back saddened by the poor conditions under which they were educated.”

Gail went in 1962-63 as an American Field Service (AFS) Exchange Student to Redlands High School in California. Upon her return to South Africa, she chose to pursue her passion of zoology and botany in her university studies, while also doing what she could to create educational opportunities for black South Africans.

She writes: “My first teaching role was as a student volunteer when I was at University in South Africa. We would be bussed out to the African township at night, enter a shed and there would be a 10-year old boy, some factory workers and a couple of old men. Sweaty and tired they eagerly soaked up whatever basic maths we could teach them.” Gail has also said: “We were locked into the van for the journey and locked into the classrooms for safety. It was illegal to be there but extremely rewarding” to be teaching black South Africans who were “eager for knowledge and extremely grateful”.

In 1966, Gail graduated from the University of Witwatersrand in Johannesburg with a Bachelor of Science. Moving to Italy for a year, she worked as an au pair in Monza, learning Italian and exploring Europe, before returning to South Africa where she taught biology and general science at a Catholic boys’ school and (after her marriage in 1970 to Dr Bill Roediger) at a Catholic girls’ school. She felt she had complete freedom in planning courses and methodology until Inspectors from the National Party government, which put education in the hands of the Calvinist Dutch Reformed Church, sought to impose strict orthodoxy: “I was told I should not be teaching the Theory of Evolution.”

After the birth of Anthony in 1972 and Carol in 1974, Gail and Bill took their young family to Oxford in 1976 for Bill to undertake his doctorate as a Nuffield Scholar. In Oxford, Gail completed an Advanced Diploma in Teaching in 1977, studying philosophy, sociology and education. “To read Philosophy at Oxford”, she says, “was a real treat as discussion was to suck out the last out of a topic or idea or word. It was intense.” She wrote her thesis on Evolution.

Armed with two tertiary qualifications and the knowledge of the tensions at home in South Africa, and fearing that the Apartheid system might never be broken down, Gail and her family migrated once again, settling in Melbourne in 1979. Shortly after, Gail welcomed her third child, Jessica, safely into the world.

After just two years in Melbourne, the family moved for the final time to Adelaide. While Bill worked as a surgeon at the Queen Elizabeth Hospital, Gail retrained again to have her teaching registration recognised in South Australia, gaining a Diploma of Education from the University of Adelaide in 1985.

With renewed passion and an insatiable interest in the botanicals of South Australia, Gail once again began teaching high school biology, teaching at Unley High School and Black Friars Priory School before settling into a role at Concordia College from 1988 to 1997, with subsequent spells of relief teaching.

“Teaching High School Biology in Australia”, she writes, “immediately fascinated me because of the similarities and differences in the organisms [between South Africa and Australia] due to the fact of Gondwanaland and the slipping apart of the continents.

“I loved teaching. I never gave the same lesson twice. I acted out plant and animal structures in the classroom to keep the students amused. I returned tests the next morning to maintain the students’ interest in their progress.”

In 1990, Gail’s son, Anthony, came to St Mark’s as a Hawker Scholar and spent four years in residence. In 1997, her younger daughter, Jessica, was also awarded the highly competitive Hawker Scholarship and also spent four years in residence. Gail watched with gratitude as St Mark’s “played a formative role in the start of their adult lives and was character building for both”. They have gone on to highly successful careers, Anthony with the Boston Consulting Group, and Jess as a paediatrician.

At the College’s invitation, Gail Roediger joined the Education Committee at St Mark’s in March 2000, and the College Council and its Executive Committee in March 2003. When in March 2004, a new College Board was formed to replace the Executive Committee, Gail was appointed to it. When she retired from the Council and Board in March 2011, it was recorded that “the Chairman thanked her for her contribution and was delighted that she would continue her service as a member of the Education Committee”, which she did for several years.

In that capacity, Gail enjoyed interviewing the first-year students and those in 2nd and 3rd years who needed particular support. Helping them to work through their difficulties of “homesickness, immaturity, not being engaged in the course they (or their parents) had chosen, or cultural differences”, Gail hoped she helped to put students “on the right road”.

While she regards her service on the Education Committee as her “most satisfying input", and it has been emphasised in expressions of gratitude for her service to the College, it was not Gail’s only contribution as a conscientious member of the College’s governance bodies. Long-term Bursar Mark Penniment recalls Gail as “a warm, personable and friendly, very interested and caring person with the best interests of students at heart”. He says that her “asking the probing questions at Board meetings” led to “good and insightful discussion”, and she brought the helpful perspective of a parent, and of a parent of students who had attended the College. Not least, he valued her “asking questions and wanting to know and understand the financial reports each month”.

Gail recalls: “I enjoyed being on the Board of St Mark’s College because I believe in the value of a college life for the healthy maturation of university age students. I also felt I was giving something back as two of our children had received so much from their Charles Hawker Scholarships. The college had become co-educational and the one other woman on the Board was Helen Reid. We had the same outlook on girls’ place and rights at university. We supported each other. I would not have wanted to be the only woman on the Board!”

In 1995, Gail retired from full-time teaching to care for her mother after she was diagnosed with motor neurone disease. But it has been a very busy and productive “retirement”, marked by superb community service, including at St Mark’s.

Following her retirement from full-time teaching, Gail joined a group at Cabra College “where there is a wonderful venue dedicated to women’s work. We taught English to migrant women who had children too small to allow the mothers to go to classes offered by the government. We had volunteers who would entertain the children while the adult classes were held. This was a wonderful experience for me getting to know so many from faraway countries, and to help them settle into their new country” – something she had done so successfully herself in moving from South Africa first to the UK and then to Australia.

For six years, Gail spent a couple of months each year in Cambodia teaching small groups of men and women how to teach. She found this service in a rural area near Sihanoukville “an interesting challenge as the teachers were repeating the way they were taught, which was in a militaristic style and by rote. They were very keen to learn good pedagogy”.

Gail has since “settled to teaching the public in Adelaide, by being a Botanic Garden guide. I enjoy passing on the pleasures of the natural world and love meeting tourists from interstate and overseas. They can always teach me something.”

Gail’s passion for nature, and especially for plants, has also been reflected in volunteer activities with the Australian Plant Society (for example, helping with native plant sales), with the Field Naturalist Society of South Australia, surveying biodiversity in different areas of the state, and herself revegetating a four-acre site on the Fleurieu Peninsula with native plants. For a time at her local church, she did the flowers, and delivered donated groceries to St Luke’s Mission. Gail has also served on the finance and house committees at the Lyceum, “a women’s club for Learning for Life”.

We have much reason to be grateful that Gail Roediger’s commitment to serving others, and her passion for education, has benefited very many St Mark’s students through well over a decade of conscientious service to College governance and to helping our students, including to ensure the success of coeducation at St Mark’s. Thank you, Gail!

Researched and written by Margot Pick.