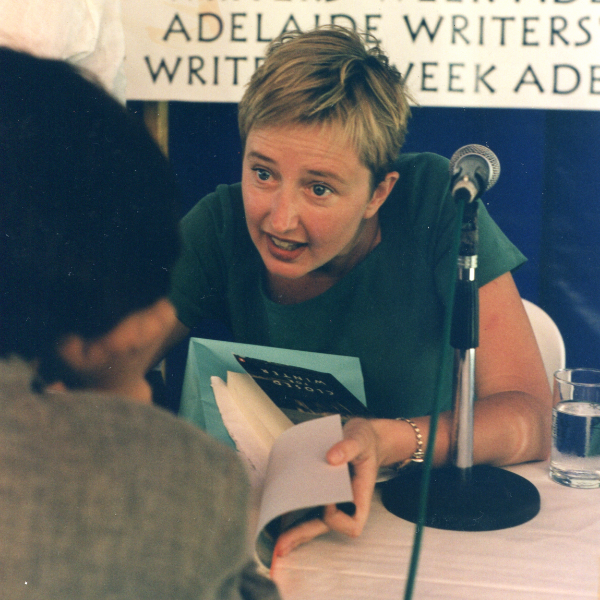 Georgia Blain (1964-2016) was a celebrated novelist and one of the first women to attend St Mark’s College in 1982. Already a prize-winning poet when she entered St Mark’s, Georgia went on to be, in the words of one writer, “acclaimed as a novelist, short story writer and essayist who transformed the everyday into works of extraordinary beauty and clarity”.

Born to acclaimed journalist Anne Deveson and prominent ABC broadcaster Ellis Blain, Georgia grew up surrounded by books and seemed “destined to become a writer”. Her secondary education was at Ascham School in Sydney and then at Pembroke School in Adelaide, before entering St Mark’s in 1982 with an Angas Parsons Scholarship to study Arts/Law at the University of Adelaide.

When Georgia applied to St Mark’s in 1981, one of her referees wrote of her: “She is, by every meaning of the word, outstanding. She combines natural talent, academic ability and capacity for hard work to a degree that I have encountered rarely, if ever.” Another wrote of her as “a sensitive and literate girl whom it is impossible to fault in any way. ... Georgia is modest and quite unassuming but her future success is assured”. Her aspiration was to be a “journalist, preferably using law as an additional qualification”.

The draft of her debut novel, Closed for Winter, set in seaside Adelaide, earned her a mentorship with Rosie Scott through the Australian Society of Authors mentorship program. Closed for Winter was published in 1998 and quickly became a best seller, with Georgia being named one of The Sydney Morning Herald's Best Young Novelists in 1999.

The success of her first novel was followed with several others including Candelo (1999), The Blind Eye (2001), Names for Nothingness (2004), Too Close to Home (2011), and Between a Wolf and a Dog (2016). Georgia also applied her literary talent and expanded her writing style, publishing the young adult novels Darkwater (2010) and Special (2016), as well as a short story collection, The Secret Lives of Men (2013).

Her Births, Deaths and Marriages: True Tales (2008) was published as she undertook a PhD in creative writing at the University of Western Sydney, and she continued with other writing, including regular columns for The Saturday Paper as she battled against brain cancer in 2015-16.

Several of Georgia’s books were shortlisted for major literary awards. Between a Wolf and a Dog was awarded the 2017 Victorian Premier’s Literary Award for Fiction and the 2016 Queensland Literary Award for Fiction. Closed for Winter was adapted for film in 2009, starring Natalie Imbruglia and filmed in Adelaide, and The Museum of Words: a memoir of language, writing, and mortality, was published posthumously in 2017.

Georgia was diagnosed with brain cancer in November 2015, and died in December 2016, just days before the death of her mother. She was survived by her partner, Andrew Taylor, and their daughter, Odessa.

Georgia Blain was described by one obituarist as “one of Australia’s finest writers”. “There is”, the obituarist wrote, “no better way of remembering Georgia than reading her work.”

Georgia is remembered at St Mark’s with warm admiration. In 2020, she was posthumously recognised by the College as a Distinguished Collegian, and a photographic portrait of the young and vibrant Georgia Blain was unveiled on Founders’ Day 2021 in the College Dining Hall, where it now hangs.

There is more information about Georgia Blain here and here.

Written and researched by Margot Pick