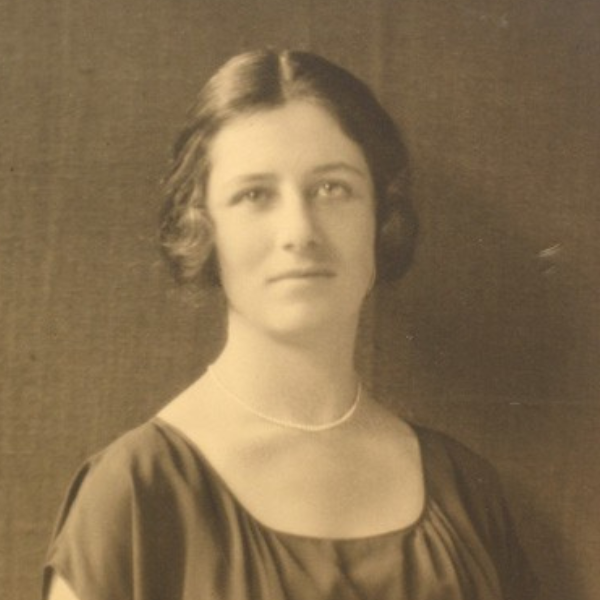 Mrs Kathleen Lilias Needham, known as Lilias, was a generous philanthropist, biographer, and pivotal supporter of St Mark’s College. Determined to perpetuate the memory of her brother Charles Allan Seymour Hawker (a founder of the College, and a much-admired political figure), she was integral to the College’s acquisition of Hawker House and the creation of the C.A.S. Hawker Scholarship, and wrote a well-received biography of her brother. Her life of selfless service is now memorialised at St Mark’s with the Lilias Needham Medal for Service.

Born on 5 May 1900, Lilias Hawker, as she then was, had an idyllic upbringing. Raised in the Hawker residence of Pirralilla, Aldgate, South Australia (“Pirralilla” means “beautiful hill”), she grew up alongside her three siblings - Charles, Michael, and Isabel. Her days were filled with schooling, horse-riding, swimming, and playing amongst the expansive grounds. While hers was a privileged childhood, it was nevertheless similar to many of South Australia’s wealthy landed families. Her parents, Michael and Elizabeth “Bessie” Hawker (née McFarlane), sought to instil a strong sense of service and patriotism into their children. Time would demonstrate that Michael and Bessie were beyond successful in this, with a legacy that endures to this day.

In 1913, Lilias’s brother Charles went to Trinity College, Cambridge, to study history, and Lilias and her family went to England to settle him in. During their stay, World War I broke out in August 1914. Lilias and her siblings were educated in England during the war whilst Charles joined the British Army to fight. One of Lilias’s memories was that whilst at school in England, she was invited by the daughter of the British Ambassador to Tehran to stay with her for the holidays.

Charles Hawker’s valour and courage on the battlefield were lauded by all who fought alongside him, but the conflict left grievous bodily injuries – he was lucky not to be killed. He returned from war service with one glass eye and paralysed from the waist down. As he battled past his war injuries and learnt to walk with metal braces at an agonisingly slow pace, Lilias’s respect – even adoration - for her courageous older brother grew all the greater.

Lilias Hawker married Richard Needham, the scion of one of Adelaide’s oldest families, on 6 May 1933 at the Church of the Ascension, Aldgate, with a reception afterwards at Pirralilla. It was a small wedding (probably due to her father’s illness) and held during the depths of the Depression. Only relatives were present, and Charles was best man.

After Lilias’s marriage to Richard Needham, they moved to Loxton where Richard was the manager of the State Bank, Loxton Branch. Later, Lilias and Richard moved to Dillowie (Charles Hawker’s property), near Canowie (between Hallett and Jamestown), and managed that until its sale in the mid-1950s when they moved to Adelaide.

In part due to her family background, Lilias took a keen interest in wool growing and supported the increased production of wool. This was but one of her many interests. She had a particular interest in international affairs, and an extensive circle of friends, such as Daisy Bates (the long-time student of Aboriginal culture who lived in remote Aboriginal communities for many years), Sir Walter Crocker (Australian Ambassador to Rome in the 1960s, and later long-term Lieutenant Governor of South Australia), and members of the Barr-Smith family, such as Molly Legoe and Nan Thompson.

Lilias Needham was a keen tennis player and golfer. She was a regular golfer at the Royal Adelaide Golf Club (Seaton) and won a number of ladies’ competitions. She was outgoing and liked to travel, and had a lifelong passion for learning, as a result of which much of her charitable giving related to education. Lilias Needham’s niece, Mrs Mary van Dissel, has observed that Lilias regretted that, due to her sex and class, she was not able to go to university.

Over many years from the 1930s on, Lilias had developed a reputation as a generous philanthropist, supporting many of South Australia’s service-minded organisations such as the Red Cross, Helping Hand, the Synod of the Church of England, St Barnabas Theological College, Meals on Wheels, Elderly Citizens Homes of SA, Royal Flying Doctor Service, Royal District and Bush Nursing Society, and Bedford Industries Vocational Rehabilitation Association.

Through the 1930s, Lilias had watched proudly as her brother Charles’s stature as a highly regarded federal Member of Parliament grew, even to the point of his being widely considered a possible Prime Minister. It was, however, never to be, as he was killed in the tragic Kyeema air crash in 1938.

Charles’s death was a profound blow to Lilias, who – already a recognised philanthropist in the community – would spend much of the remainder of her life dedicated to ensuring that memory of Charles’s outstanding qualities lasted into posterity. As Charles was a founder of St Mark’s College and one of its largest benefactors, Lilias became deeply interested in finding a way to memorialise him and support the College. Herein lie the origins of the purchase of Hawker House in 1969.

The College had been looking to expand its grounds for some time. The most appealing option was the Education Department’s Correspondence School – adjacent to the Grenfell Price Lodge – but St Mark’s finances were insufficient to fund such a purchase. Fortunately, Lilias would intervene at a critical juncture. In confidential communications with then College Council Chairman, Gavin Walkley, Lilias offered $10,000 in cash to St Mark’s to facilitate the purchase and promised a further $20,000 bequest in her will. The College Council received the news with “great enthusiasm” and was “overwhelmed by [her] generosity”.

The only conditions were that the property be named Charles Hawker House and that her donation be anonymous. The importance to her of her anonymity was such that she reiterated the point in several letters. Her request was honoured, the Correspondence School was purchased and renamed Charles Hawker House, and her identity was never revealed in her lifetime.

On her death in 1975, the College found that not only had she left the $20,000 promised for Hawker House, but also a home in North Adelaide which, on its sale, greatly strengthened the College’s fragile finances – making Lilias Needham, in Gavin Walkley’s words, “one of the major donors among the many generous benefactors of the College”.

While seeking concrete ways to memorialise her brother, Lilias Needham was also in the 1960s working to ensure that a definitive account of his life was published. His life was, as commentators pointed out, an “epic of courage and determination”. With no formal historical qualifications, Lilias was initially hesitant to write the biography. However, after a number of arrangements fell through, she resolved to embark on the endeavour herself.

Lord Casey, Governor-General of Australia, said that “there is no individual whose life more deserves to have been written than Charles”, and promptly purchased 100 copies of the book. Sir Walter Crocker noted the work’s “assiduity and objectivity”, the book received favourable reviews, and Lilias’s telephone “kept ringing” in the weeks after publication as admirers sought to contact her. The book sold so well that it soon received a second edition. Despite this success, Lilias remained modest, with one publication referring to “the self-effacing way she has kept herself out of the limelight” as “a study in itself”.

Having already done so much, Lilias did not rest, sponsoring the construction of a Charles Hawker Conference Centre at the University of Adelaide’s Waite Campus with a sizeable $150,000 donation, described by the President of the University of Adelaide’s Appeal, Sir James Irwin, as “a magnificent and generous gift and a great encouragement”. The Charles Hawker Conference Centre at Waite is still in use today.

Lilias also donated to Burgmann College at the Australian National University, where Charles is memorialised with the Hawker Room, and engaged with enthusiasm with the idea (which did not come to fruition) of renovating Hawker House at St Mark’s into a Hawker Conference Centre for possible use by the University, Church, and College.

Perhaps the most conspicuously enduring impact of Lilias Needham’s remarkable generosity was to create the Charles Allan Seymour Hawker Memorial Scholarship Trust Fund. The scholarship seeks to perpetuate the memory of Charles Hawker by “assisting young people in endeavouring to follow his example” and by seeking to ensure that his qualities of “compassion for the less fortunate, his sincerity, generosity and natural common touch as well as his outstanding sense of integrity” are imbued in future leaders.

A current Hawker Scholarship Trustee, Andrew Hawker, recalls sitting with Lilias on the day she asked him if he would be prepared to replace his father as a Trustee when the time came: “She outlined quite clearly what she expected of a Trustee and what the awarding of a scholarship would achieve. Lilias stressed the principal aim was to enable those who were awarded a scholarship to have an opportunity and a similar experience to that of Charles when he attended Trinity College at Cambridge.

“Lilias was very clear that his experience during that formative time, the friendships and connections he made, had heavily influenced Charles to become the man he was. She explained the importance of St Mark’s to Charles and his desire to make it easier for country people in particular to be able to have a chance to experience the benefits of a collegiate life during their undergraduate years.

“She reinforced her wish that it was not to be an academic scholarship in the first instance, but rather hoping we would be selecting candidates that had true leadership potential in the path they had chosen to follow. They needed to be well rounded individuals with wide ranging interests.

“She was clear in her desire that the Charles Allan Seymour Hawker Scholarship was one of the best and most useful ways to perpetuate his memory on an ongoing manner. She sincerely hoped they would be able to contribute to society in a positive way much as her brother had done.”

The provisions were laid out in Lilias’s lifetime but she would not live to see the profound impact of her work. The first scholarships were awarded in 1990, 15 years after her death, and the Hawker Scholarships have seen numerous lives forever changed through residency at various colleges – St Mark’s, Roseworthy, Burgmann, Robb (University of New England), Marcus Oldham, and Trinity College, Cambridge. So far, some 49 Hawker Scholars have come to St Mark’s, many making outstanding contributions to the College and, in time, the wider community.

On Lilias Needham’s death on 26 September 1975, the Chairman of the Council, Gavin Walkley, wrote of his “sorrow”, and expressed immense gratitude for her service, and sympathy to her relatives.

Today, St Mark’s College annually awards the Lilias Needham Medal for Service to a student who demonstrates outstanding and selfless service. Introduced in 2020, the award honours the memory of a woman who embodied that “ideal of service”, and seeks to encourage and recognise that spirit of selfless service in students of St Mark’s.

Lilias Needham so indelibly impacted the College that the St Mark’s community will forever owe her a debt of gratitude. 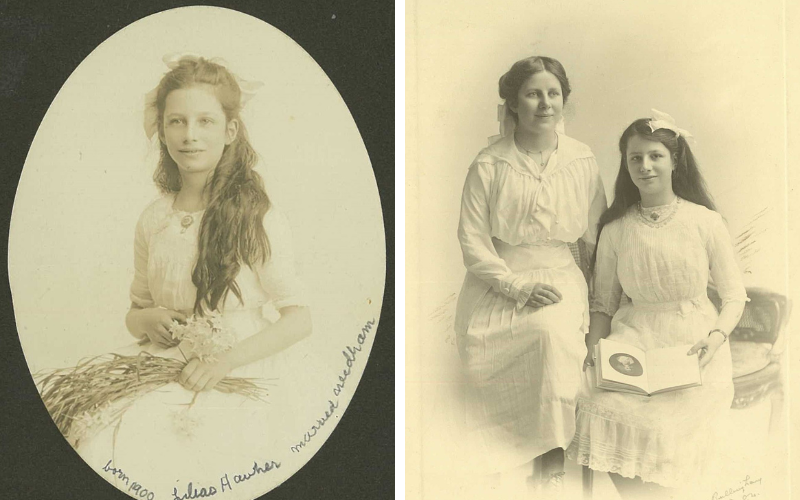 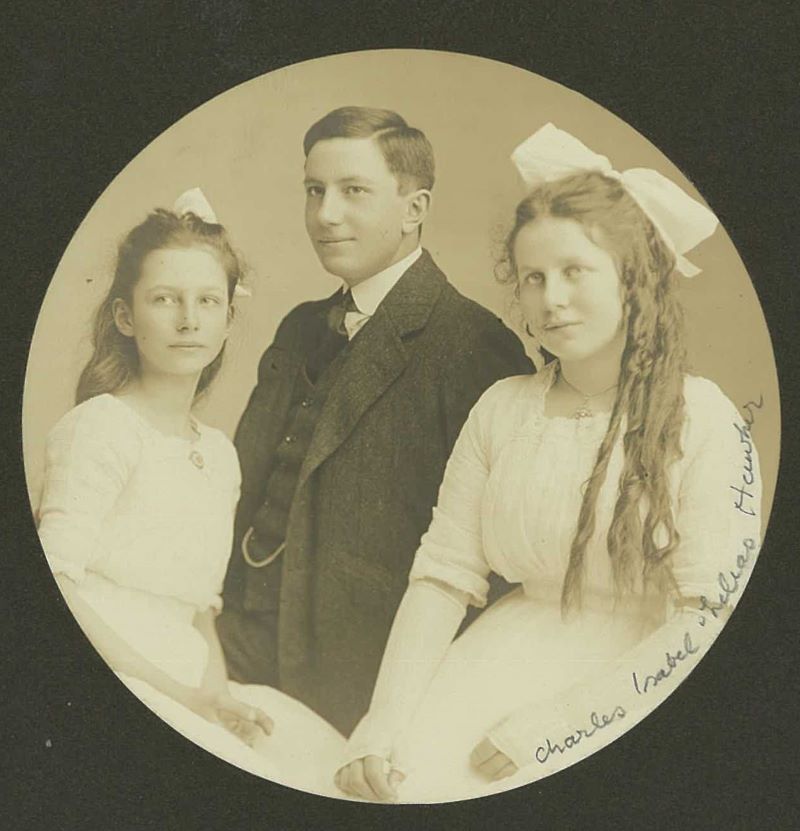 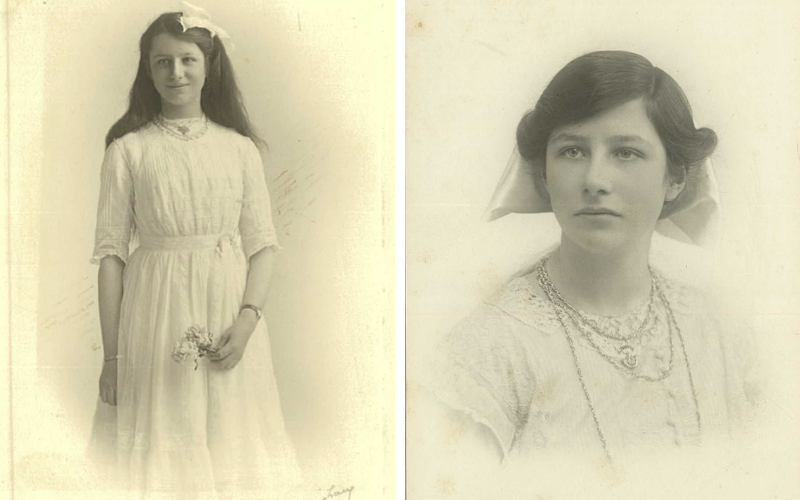 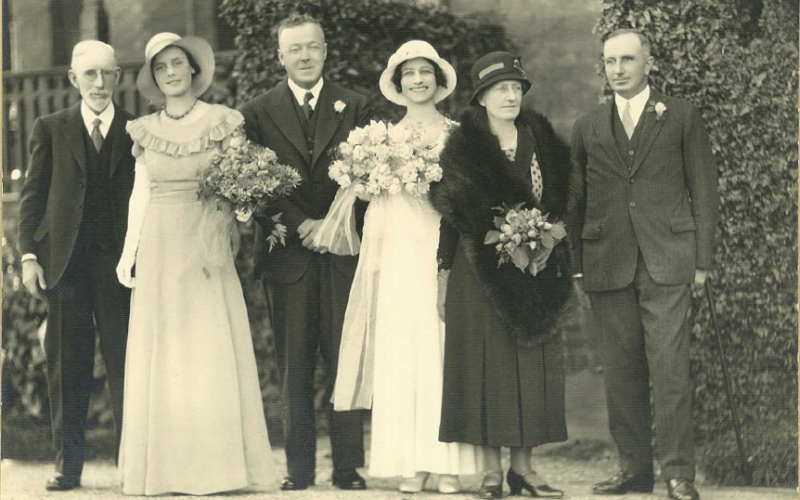 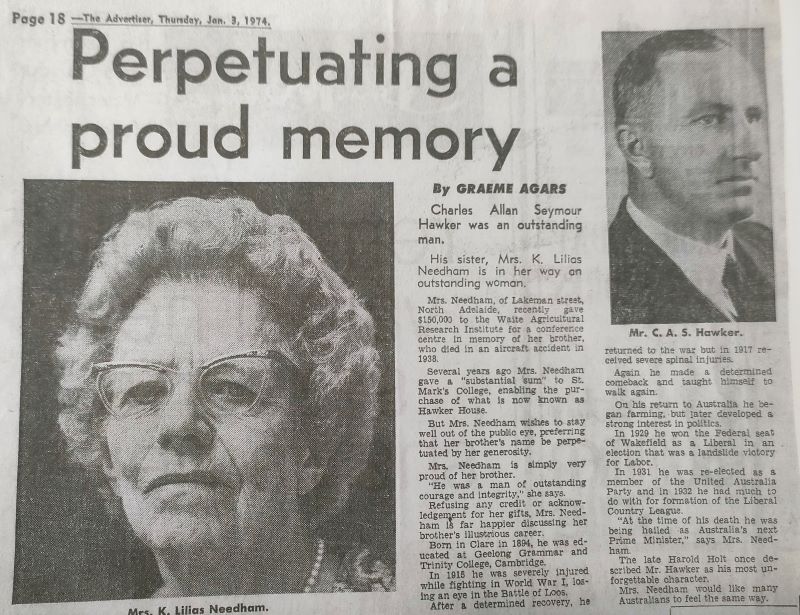 Lilias Needham in The Advertiser, 3 January 1974