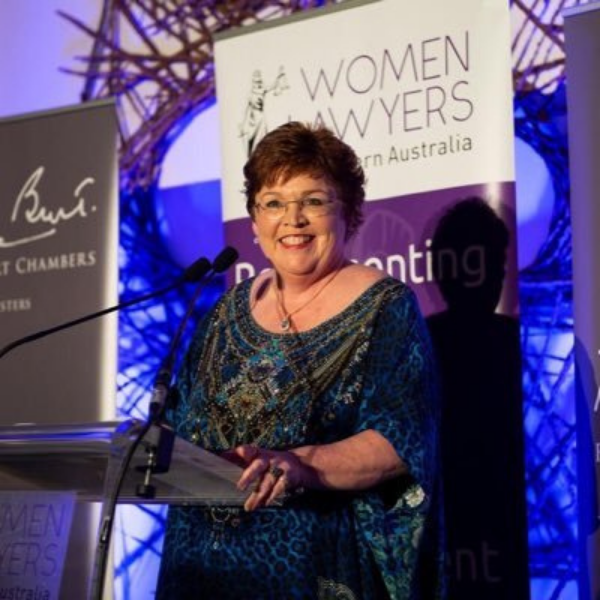 An articulate force to be reckoned with, Ms Clare Thompson SC – one of the first women students to enter the College in 1982 – has long been recognised as a leader in the legal profession in Western Australia and among Australian women lawyers. She is also an active champion of access to education, including through seed funding the Women of St Mark’s Scholarship at the time of 30th anniversary of the admission of women students to the College.

Raised in the mining centre of Broken Hill, Clare’s education was split between her home town and boarding schools in Adelaide. Completing her schooling at Wilderness School, she truly flourished. A “loyal member of the school choir” and elected by her peers to the Students Representative Council, she received an excellent Matriculation pass and was described by Mrs Ruth Birrell, Headmistress of Wilderness, as “intelligent, motivated, articulate and good fun”. These qualities would see Clare receive a Rotary Scholarship to spend a year on exchange in Mexico, which ignited a passion for travelling and experiencing the world.

On her return from Mexico, Clare entered St Mark’s to study for a Business degree at the South Australian Institute of Technology (now the University of South Australia), and soon showed her characteristic enthusiasm and gusto. A fierce advocate for students, she was soon elected to the council and then later as student Vice-President at SAIT. Her impact at St Mark’s was such that, in an amusing and insightful speech at the Final Dinner in 1982 – the end of the first year of women students at St Mark’s – the Master, Dr Peter Edwards, predicted that Clare would become “the ABC’s expert on business affairs”.

Clare herself fondly recalls “dinners, dances, nights watching Brideshead Revisited, tennis and visits to the Queen’s Head” during her years at College (1982-83). “My favourite memory”, she writes, “is of the dinner on a roundabout some of us organised for a friend’s 21st birthday – it was a hoot.” Like so many other College students, she worked part-time at a pub and then a restaurant whilst at St Mark’s and had summer jobs, including one as a cook on a sheep station.

After completing her degree, Clare spent nearly 15 months overseas. Three months were spent on a BAVE exchange to Cambridge, an opportunity which she attributes to her time at St Mark’s. She then spent a year working in London before backpacking across the European Union in the winter of 1985-86. In travelling much of Europe, learning Italian in Florence and meeting peoples from across the continent, this experience of the breadth of the world was truly formative.

After returning to Australia, Clare joined BHP in Western Australia in early 1986. After some years working as an HR manager at BHP and elsewhere (and university study and teaching in management), Clare embarked on a bold career change by commencing study for a Bachelor of Laws at the University of Tasmania. She graduated in 1993 with 1st Class Honours. She soon returned to Perth now ready to make an impact as a lawyer - and what an impact she would have! The following decades have been a veritable whirlwind of professional achievement and service.

Clare joined Freehills, Barristers & Solicitors (now Herbert Smith Freehills) as an Articled Clerk in 1994, and progressed rapidly within the firm, in 1997 becoming an Associate and in 2000 a Senior Associate.

Always very engaged, Clare was for several years actively involved in politics, standing as a Liberal candidate for the Senate in Western Australia in 1996, and being elected to the 1998 Constitutional Convention as an Australian Republican Movement candidate.

At this same time, Clare became increasingly involved with the Law Society of Western Australia, Women Lawyers of Western Australia, and Australian Women Lawyers. Within the Law Society of WA, she was prolific in her committee involvement, which saw her recognised by her peers with her election as Treasurer in 1999, Senior Vice-President in 2001, and President in 2002.

Simultaneously, Clare was actively advocating for women within the legal profession. Active in Women Lawyers of Western Australia since 1994, she served in various roles on its committee in 1994-2001, including as Vice-President. She again served as Vice-President in 2018-19, and has been President since 2019.

Clare also helped to found Australian Women Lawyers (AWL), serving in 1995-97 as the WA representative on the inaugural committee formed to establish AWL. She served as a Director of AWL from 1997-2001, including as Vice-President in 2000-01.

A lifelong learner, Clare once again returned to higher education, completing a Master of Laws degree at the University of Melbourne in 2004 – the same year she was elected as a member of the WA Bar Association, and joined Francis Burt Chambers as a barrister. It was also the same year she was nominated for the University of Tasmania’s distinguished graduate award by the Faculty of Law.

Clare practises as a barrister in commercial dispute resolution, with an emphasis on property, wills and estates, banking and taxation disputes in the Federal and Supreme Courts and the Administrative Appeals Tribunal. She “took silk” as Senior Counsel in October 2021.

Along the way, she has been recognised as the WLWA Women Lawyer of the Year in 2012 and the Law Society of WA Lawyer of the Year over 5 years admission in 2012, and listed in Doyle’s Guide as a leading tax barrister in WA in 2020 and 2021. In 2012, she was also named by the Australian Financial Review in their inaugural 100 Women of Influence listing.

Crucially, and as she has always done, Clare has remained engaged in service to the wider community alongside her professional commitments. Amongst much else, she has focused her skills toward extending opportunity for young women and Indigenous women. She has, for example, served as Patron of the Women’s Legal Centre, as Director and Trustee of the Aboriginal Women’s Legal Education Trust (which she set up and generously seed funded), and on boards of organisations dedicated to offering legal aid.

Clare has also served on numerous boards and committees across health and legal profession regulation, and chairs the Legal Costs Committee, a statutory authority responsible for the review of all legal costs scales in force.

“My big thing”, she has written, “is access to education. I founded a charity which gives scholarships to indigenous women to study law, I have built several primary schools in Cambodia, and gave a substantial donation to St Mark’s to kick off the scholarship for regional and rural women. My husband and I have also endowed a scholarship at University of Western Australia for regional and rural women doing science, in memory of his mother. I firmly believe that access to education is how to change the world.”

Each year over the last several years, young women have been supported by the Women of St Mark’s Scholarship to be at St Mark’s, thanks in significant measure to Clare’s generosity, vision, and leadership. Their gratitude for this life-changing opportunity is profound.

In her professional work, community service, and philanthropy, Clare Thompson superbly embodies the values of St Mark’s – and we remain deeply grateful to her.

A brief Q & A with Clare Thompson:

It helped me appreciate difference. Especially in what people did and where they came from, both by country and school and indeed what they studied. It’s imperative in life to see the breadth of the world, St Mark's showed me that.

My law degree (1st Class Hons at U Tas), and my recent appointment as a silk. Plus being the most junior person ever elected President of the Law Society of WA and being an inaugural director of Australian Women Lawyers.

Being able to travel freely again.

I am very strategic and able to look to the end to work out what to do en route.

What has been your involvement, if any, with the College since you were a resident
student at St Mark’s?

I’ve kept up with various people from my college life and I seed funded a scholarship for rural and regional women students set up at the time of the 30th anniversary of coeducation.

Don’t drink so much!

I loved the library, not for work, but it was a great place to gossip and for catching up.

Which book would you recommend we read as Collegians before graduating from university?

The Great Gatsby – it shows the shallowness of wealth as a pursuit.