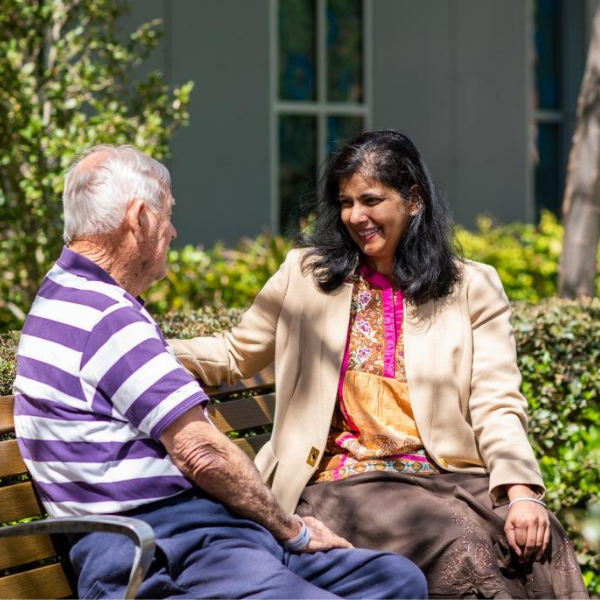 A medical expert in geriatric frailty who has made significant contributions to aged care, Professor Renuka Visvanathan has consistently worked to serve many of society’s most vulnerable. Having moved from Malaysia to Australia, her six years at St Mark’s (1991-1996) saw her flourish as a student both academically and in leadership before commencing what has become a nationally and internationally acclaimed career in geriatric medicine.

Professor Visvanathan has an international reputation in the research area of nutritional frailty. She is especially interested in the provision of quality health care to prevent the impact of frailty (e.g. falls and fracture) as well as to improve the wellbeing, function and quality of life of frail, older people and consumers with dementia. She is also interested in research that is likely to translate into improved clinical practice.

Growing up in Alor Star, the capital city of Kedah in northern peninsular Malaysia, Renuka is thankful for the education she received. A pupil at St Nicholas Convent, for primary and secondary education, and Sultan Abdul Hamid College for the Sijil Tinggi Pelajaran Malaysia (Malaysian Higher Certificate of Education), she excelled. She was awarded the prestigious Pingat Bestari (Intelligent Medal), an award bestowed on Malaysia’s three highest performing students in the Sijil Pelajaran Malaysia (Malaysian Certificate of Education).

At the same time, she also pursued her passion for golf (becoming the Piala Bapa Malaysia or Father of Malaysia Cup golf champion in 1987) and became the first Indian woman to swim the Penang Channel – a three-kilometre strait of open water between peninsular Malaysia and the island of Penang. A keen pianist, she also completed a Diploma of Music before coming to Adelaide to study medicine.

Renuka’s decision to come to Adelaide was one of both intriguing historical and family connection. She had grown up only an “18 minute car ride” away from Kuala Kedah, the birthplace of Colonel William Light, South Australia’s first Surveyor-General and initial designer of Adelaide. Her family GPs had also studied at the University of Adelaide, and her father’s brother had already migrated to Adelaide. Renuka reflects that it came as “no surprise then that Adelaide was a choice destination for further learning”.

She also recalls: “My parents always envisioned that both my brother and I should receive equal education. They were particular that we should also experience college life, something that my mother experienced when she undertook her teachers training in Malaysia.”

Arriving at St Mark’s College in 1991 on a Merit Scholarship from AusAid, Renuka was enthusiastic about commencing her Bachelor of Medicine and Bachelor of Surgery – and joining her brother (Dr Thavarajah Visvanathan) at St Mark’s. Her earliest memories are of the “inclusive nature of the students” and how they encouraged her involvement in a game of cricket – in her words, “although I had no knowledge of the game and was clearly hopeless at it. It was my first experience of having a ‘fair go’ and being encouraged to give something a try without shame”.

Renuka excelled academically. Within the College, she was awarded Sholto Douglas and Lendon Scholarships in recognition of her excellent university results, and also received Academic Colours. Within the University of Adelaide, she graduated on the Dean’s list and also received the Christopher and John Campbell Prize for Biochemistry in 1993, the William Donithorne Award in 1993 and 1994, and the McConnochie Scholarship in Medicine in 1994.

Looking back, Renuka reflects that support from professors in residence at St Mark’s, Don Nicholas and Robert Ussher, and the Master, the Dean and the Chaplain were instrumental in her fulfilling her potential. “I would not also discount the help I received from the kitchen staff and the housekeepers”, she writes.

Not just an impressive student, Renuka also became actively involved in broader College life. A proud “teetotaller” who “remained just that throughout [her] time at St Mark’s without pressure to change”, Renuka was an active member of the College Club. She served as the Foreign Students’ Representative for 1993 and 1994, and also served as the Golf Secretary in 1993. These experiences were formative and Renuka credits them with giving her “self-confidence and encouraging her participation in student committees and activities”.

Remembering her time at St Mark’s, Renuka reflects that it afforded her the “opportunity to understand life in Australia within a safe environment with support”. Furthermore, the “willingness of students and staff to accept diversity and respect the cultural practices of others” was wonderful. Renuka jokes that by the time she left “rice became a regular fixture in the Dining Hall – there was always a bowl of rice for me”.

Leaving St Mark’s at the same time as she completed her Bachelor of Medicine and Bachelor of Surgery, Dr Visvanathan commenced her career as a trainee doctor in the major hospitals of metropolitan Adelaide and became a Fellow of the Royal Australian College of Physicians and a specialist doctor in geriatric medicine in 2004. An outstanding trainee doctor with a passion for geriatric research, she received the RM Gibson Prize from the Australian Society for Geriatric Medicine in 2002 for best advanced trainee research platform presentation, and went on to earn her PhD in geriatric medicine from the University of Adelaide in 2005.

In 2005, Dr Visvanathan was appointed as the Head of Unit for Geriatric Medicine at the Queen Elizabeth Hospital, at the same time becoming a senior lecturer at the University of Adelaide, balancing clinical and academic commitments. In 2008, she became an Associate Professor before in 2014 becoming a full Professor at the University of Adelaide. There, she has been actively involved in training the next generation of medical doctors and is currently the 5th year geriatric medicine and general practice course coordinator as well as the Year 5 course advisor for the Bachelor of Medicine and Bachelor of Surgery program. She has supervised to completion seven PhD and two Masters of Philosophy students. She is currently supervisor to six PhD candidates and mentors four post-doctoral fellows.

Professor Visvanathan continues as the Head of Unit for Geriatric Medicine at the Queen Elizabeth Hospital, and provides “clinical care as a specialist geriatrician to older patients, something I absolutely cherish”.

Professor Visvanathan has served as a valued member of various aged care organisations. From 2011 to 2021, she served in governance roles with Resthaven Incorporated, a large not-for-profit retirement living provider. From 2015 to 2016, she advised the Ageing Well Subcommittee of the Economic Development Board of South Australia on how the state could become a globally recognised leader in health research and aged care service provision. Shortly after, she was convenor of the Australia and New Zealand Society for Sarcopenia and Frailty Research’s Adelaide conference in 2017.

Since 2016, Professor Visvanathan has been a member of the World Health Organisation Clinical Consortium on Healthy Ageing, a group of global experts on healthy ageing who coordinate the sharing of key research across national boundaries to develop international capability. She was a Chief Investigator and member of the Executive Committee that oversaw the establishment of the highly successful Registry of Senior Australians, a highly valued national resource, that has brought together state and national databases to help understand how older people engage with aged and health care services.

She is currently project lead for the National Health and Medical Research Council Centre of Research Excellence in Frailty and Healthy Ageing. Its trans-disciplinary research project on frailty and healthy ageing aims to address the fact that by 2050, four million older Australians will experience frailty. It is this future-focused work which will have a real impact on many Australians that occupies much of Professor Visvanathan’s time.

The great value of her work has seen her awarded a Fellowship of the Australian and New Zealand Society of Geriatric Medicine in 2013, recognised as a Distinguished Member of the Australian Association of Gerontology in 2016 and then as a Fellow in 2019, and honoured by the Indian Academy of Geriatrics in 2019. She has broadened her academic qualifications by securing a Graduate Certificate in Higher Education at the University of Adelaide in 2010, and a Masters of Business Administration (focused on health service management) from Southern Cross University in 2020.

Having made her life and career in Adelaide since coming to St Mark’s from Malaysia, Professor Visvanathan “drives past the College often, show[ing] it off to family and friends proudly”. She fondly recalls that earlier this year, she and her brother “strolled through the College and reminisced about our time at College and marvelled at the changes – especially the new car park”.

A passionate Collegian at heart, Professor Visvanathan is living the ideal of service which St Mark’s seeks to instil in all.


A brief Q & A with Renuka Visvanathan:

Choose three words to encapsulate your time at St Mark’s

Relax, there is a world of exciting opportunities ahead.

My favourite places in the college were the central lawns and the lawns in front of the cottage. These patches of green were just lovely to look out to from the room windows. Being able to live amongst greenery was just so lovely.

I would love to have dinner with some friends from St Mark’s and reminisce about our fun times at College – Vynka Perera, Tara Bate, and Naoko Futami (Moore).

Being friendly and happy as well as courageous when trying something new has been instrumental to my success.

Education is the key to helping achieve gender equity, be it in Australia or elsewhere.