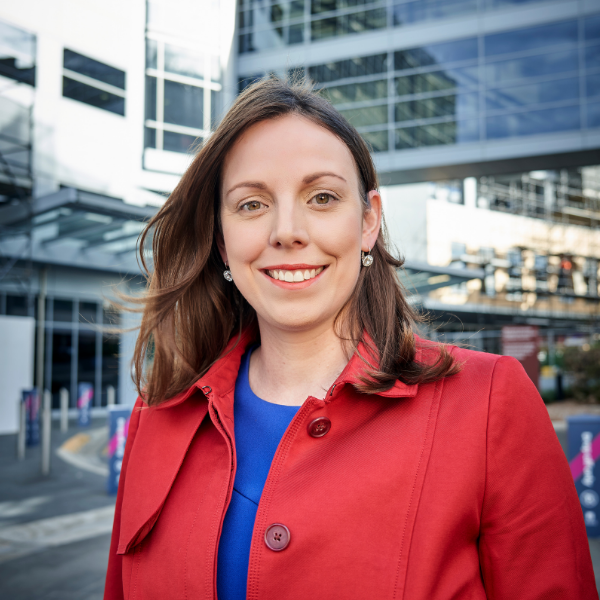 A medical expert in cognitive neurology with an impressive record of sporting achievement, Dr Rowena Mobbs (née Newcombe) is a tireless pioneer working to address a form of brain degeneration caused by repeated head traumas, chronic traumatic encephalopathy (CTE). Her interests in medicine and sports both flourished during her six years in College (1999-2004), when her outstanding and diverse contributions to student life saw her awarded the highly prestigious Collegians’ Prize in 2002.

Having, in her words, “grown up in the quiet of Canberra”, Rowena was not content with laying idle. Her outstanding sporting and academic prowess were plain to see. After representing the ACT in the triathlon national championships, she represented Australia at the pentathlon junior world championships (1995-97) and represented Australia on the fencing world cup circuit from 1997 to 2010. While at school Rowena undertook Duke of Edinburgh bronze and silver awards, and went on to complete her gold award in 2005.

A talented and conscientious student, Rowena completed her secondary education with extremely strong marks, and chose the University of Adelaide – rather than “the rain of Melbourne, traffic of Sydney, or waves of Newcastle” – to pursue her studies, first for a Bachelor of Medical Science (from which she graduated with First Class Honours) and then for a Bachelor of Medicine/Bachelor of Surgery. A recipient during her university studies of several medical scholarships and prizes at College, University, and national levels, she was awarded the Spine Society of Australia Award for Spinal Research in 2003 and 2004.

While representing Australia in fencing, Rowena was also remarkably active in both College and University sport, including captaining St Mark’s teams in four separate sports. Elected as the College Club’s Sports Secretary for 2001, she also served terms as Treasurer and as Secretary of the University of Adelaide Sports Association in 2001-3. Having previously been awarded University letters in fencing, athletics, and modern pentathlon, she was awarded a University Blue in fencing in 2001, and later served on the University of Adelaide Blues Selection Committee from 2004 to 2011.

A volunteer for Lifeline from the age of 16, and serving as a Lifeline and Youthline Counsellor for some years, Rowena’s pastoral skills were put to good effect as floor tutor (Residential Advisor) for Hawker Annex in 2002, and in much informal support for fellow students at St Mark’s.

Alongside serving on the College Club Committee, debating, and playing piano in regular Arts Evening performances, Rowena also served the College as a tutor in medicine and health sciences in 2003, and as Senior Tutor, responsible with the Dean for the organising the College’s tutorial programme, in 2004. With her own interest in neuroscience developing strongly, Rowena also lectured and demonstrated at the University of Adelaide and the University of South Australia.

Looking back, Rowena reflects that she “could not have asked for a better balance of sport, study, fun, learning and memories. My time at St Mark’s created many friendships across students and staff… St Mark’s was an incredibly welcoming, vibrant environment where people from all walks of life blended” – and “a sanctuary to come home to at the end of a long day at uni”.

After leaving St Mark’s, Rowena continued her medical training alongside doctoral research, earning a PhD in neuropathology (compressive myelopathy) at the University of Adelaide in 2011. Her PhD was a study, funded by the National Health and Medical Research Council, in spinal degeneration and myelopathy, looking into cell death and apoptosis using an experimental model and post-mortem studies.

Recognised now as an expert in cognitive neurology and one of Australia's leading experts on chronic traumatic encephalopathy (CTE), Dr Mobbs holds a Senior Lecturer position at Macquarie University Hospital and is a visiting medical officer in neurology at Mater Hospital Sydney. With over 15 years’ experience in neurology, she sees a large number of patients, from adolescent to older age, with cognitive disorders annually as Director of Harbour Neurology Group, and is an advocate for care and research in traumatic brain injury on the national stage.

Rowena co-founded the Australasian Cognitive Neurology Society (of which she was Honorary Secretary in 2019-21), is Director of the newly launched Australian Concussion and Repetitive Head Trauma Biobank, clinical lead for dementia services at MQ Health, and former Clinical Co-Director of the Australian Sports Brain Bank. A Fellow of the Royal Australasian College of Physicians (neurology) since 2015, she is also a member of the Australian and New Zealand Association of Neurologists (ANZAN).

Rowena is active in teaching and guiding the medical school program at Macquarie University Hospital, Australia's first university-owned teaching hospital. Her main research interest is in CTE, concussion, behavioural and psychiatric symptoms in dementia, and post-traumatic headache. Amongst many other publications, she has co-authored an early case report of CTE in an Australian Rules football player.

Rowena Mobbs writes: “My days are filled with seeing patients in clinic and diagnosing types of dementia, migraine, concussion and other situations of cognitive impairment. I have helped to develop a new program in Australia of community interest and research into chronic traumatic encephalopathy, a type of dementia due to repetitive head trauma in sport, blast injury, intimate partner and family violence, or falls.

“I long to see the day where sports engage properly in prevention, management, and eventually cure. Head injury is a risk factor for dementia in general, and so the concussion work links well with my other passion to lower Australia’s dementia risk by 2050. In this long tail research, it is determination and persistence in the face of sporting leaders who wish that CTE would go away that has held me in good stead.

“I encourage all women at the College in future top roles to listen to their instinct and pursue life persistently, impatiently (yes that's right, avoid being too patient) and passionately, to achieve what simply must be achieved.”

Personally, she writes, “I am proudest to have my two dear boys, husband Tony and an active life pursuing my work passion of neurology in Sydney”.

Naturally, Dr Mobbs sees further research and advocacy with regard to CTE as a significant part of her future. Central to this is the pioneering work of the Australian CTE Biobank, an initiative to better determine rates of CTE, craft earlier management techniques and how to prevent injury in the first instance. As the Principal Investigator, Dr Mobbs is determined to ensure the program’s success.

Living in Sydney for the last several years, Dr Mobbs takes a keen interest in the College “fondly from a distance”. The founders of St Mark’s nearly a century ago sought to promote what has been described as applying “a trained academic mind to ideals of service”. There is no doubt that Dr Rowena Mobbs is doing exactly that.

A brief Q & A with Rowena Mobbs:

It has been the foundation of enjoying learning and life that really has changed my outlook. Without it, I would have focussed too much on study and missed out on what makes life best. This would have been career limiting because I wouldn't have connected so easily with colleagues, nor understood much of what my patients go through.

Establishing Macquarie University's Concussion and Repetitive Head Trauma Research Group and turning the attention of Government to the important issue of CTE.

The success of the Australian CTE Biobank to determine rates of CTE, earlier management, and how to prevent it.

Altruism and a realisation that I achieve nothing were it not for others. Secondly, a blissful ability to be gullible and trust others, which is actually vital for the first one.

If you could go back in time and give your younger self one piece of advice on that
first day at St Mark’s, what would it be?

My favourite place was the tennis courts, at dawn, alone, looking at the rainbow sky and thinking how beautiful Adelaide is.

What are the most important things that should be done to promote gender equality,
within Australia and globally?

1. Better pay beyond CPI for care industries
2. Where two candidates for a board role are equal, go the female
3. Throw away the high heels.

Which book would you recommend we read as Collegians before graduating from
university?

The Compassionate Mind by Paul Gilbert.