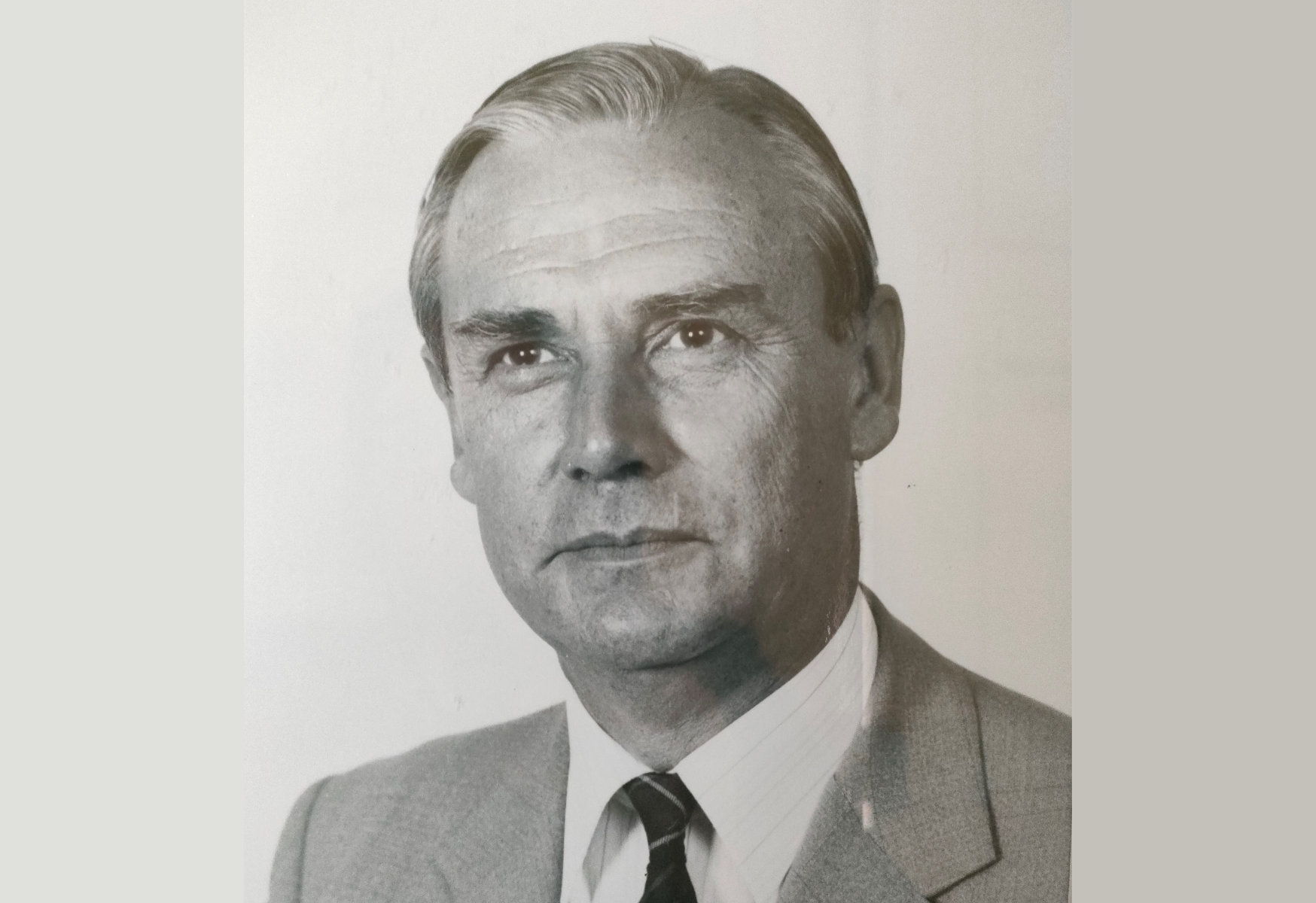 Flags have recently flown at half-mast at the College in memory of the long-term and much-admired Bursar and Honorary Fellow, Robert Duncan (Bob) Hastwell (17 March 1927 – 29 September 2021).

Bob Hastwell was a student at Prince Alfred College, Adelaide, and joined the Commonwealth Bank in 1944, before enlisting to serve in the RAAF in World War II just ten days after his 18th birthday in March 1945. He was discharged in September 1945, and returned to the Commonwealth Bank, where he worked while studying commerce (accounting) at the University of Adelaide. He joined the accounting firm of C.B. Jennings, Bowering & Duffield in 1951.

In 1953, Bob married Jill Kitchener, whose family lived in Malaya and whose brother Martin was a resident student at St Mark’s. Bob and Jill’s was to be a loving life-long partnership, their lives centred on their growing family of three children, and then grandchildren and more recently great grandchildren. Jill passed away in December 2014, aged 84.

In 1958, when Bob’s colleague at their accounting firm (by then Bowering, Duffield & Co.), C W B Kerr, retired as Bursar of St Mark’s, Bob was invited to succeed him in that role. In the same year, Bob was made a partner at Bowering, Duffield & Co. – the firm that had provided all St Mark’s Bursars from 1925, and was to go on to provide Bob’s successor as Bursar, Michael Shearer.

Bob served as Bursar of St Mark’s from 1958 to the end of 1984, as his own professional career and other community commitments continued to develop. Throughout those 26 years, he skilfully and effectively managed the College’s financial affairs, working closely with successive Masters (Mr R B (Bob) Lewis, Rev’d Malcolm McKenzie, Dr Peter Edwards, and Rev’d Peter Thomson) and Chairs of Council (Sir Keith Angas, Dr Gavin Walkley, and Justice Rod Matheson). He also, for example, took minutes of Council and other meetings, and is remembered as being able to “calm troubled waters” when needed between meetings.

Successive Masters and other members of the College Council were soon to appreciate his efficient handling of the business affairs of the College. But the many College people with whom he had dealings realized that he was not merely an efficient administrator; he came to be known for his courtesy, willingness to help and for his wise advice at all times. As a man of total integrity he has identified himself with the objects of the College, constantly and loyally acting in its best interests.

In proposing the toast to Bob at the dinner in November 1984 marking his retirement as Bursar, Gavin Walkley said of him:

His remarkable grasp of the minutiae of all the many affairs he administers has always astonished me, and his legendary courtesy under considerable work stress is also a source of wonderment. Although, goodness knows, St Mark’s is not an affluent college, such prosperity as we enjoy is very largely due to his careful attention to our financial affairs.

No one was better placed to make these judgements than Gavin Walkley, with whom Bob had worked closely not only throughout Gavin’s time as Chair of the St Mark’s College Council (1961-82), but also in architectural professional bodies in which Gavin Walkley held leading roles. In August 1984, Gavin Walkley had written the citation for Bob’s Honorary Fellowship of St Mark’s. Two months earlier, he had also initiated Bob’s election as an Honorary Member of the Royal Australian Institute of Architects, to which Bob gave dedicated service as South Australian secretary (1960-87). Bob also served the Architects’ Board of South Australia as its Registrar from 1960 to 1995, for several of those years also under Gavin Walkley’s chairmanship. Bob was also a Councillor with the Architects Accreditation Council of Australia (AACA) between 1972 and 1992, AACA treasurer from 1982 to 1986, and secretary of the Association of Consulting Architects – SA from its inauguration in 1963 until 1987.

The day after the dinner in 1984 when Bob’s election as an Honorary Fellow of St Mark’s was announced, he wrote to Gavin Walkley: “The possibility of being made a Fellow had not crossed my mind, & I regard it as a great honour. Such a distinction is one which I will always value greatly.”

Even as recently as the last year, Bob has continued to take an interest in the College’s affairs, writing to the Head of College, Professor Don Markwell, last New Year’s Eve: “I am delighted to hear of the College’s success in 2020. May it continue in the future!”

After many months of illness, Bob Hastwell passed away on 29 September 2021. Professor Markwell and Honorary Fellows the Hon. Rod Matheson AM QC and Associate Professor Rob Cheesman AM attended his funeral at St David’s Anglican Church, Burnside, where he and Jill had long worshipped, and where he was remembered with warmth and sincerity as a “wholesome” man, deeply devoted to his family and to the charities and other good causes, such as Rotary, to which he and Jill were so committed.

Mr Matheson, who was Chair of the College Council in Bob Hastwell’s last three years as Bursar, has expressed his “great regard” for Bob as “an excellent Bursar for St Mark’s”, who was always both calm and helpful. Associate Professor Cheesman, who knew Bob both from St Mark’s and from architectural professional bodies, has written: “His quiet and constant contribution to several professions, kind and thoughtful manner, gentle advice, and politic minute-keeping will be well remembered.”

May he rest in peace and rise in glory.