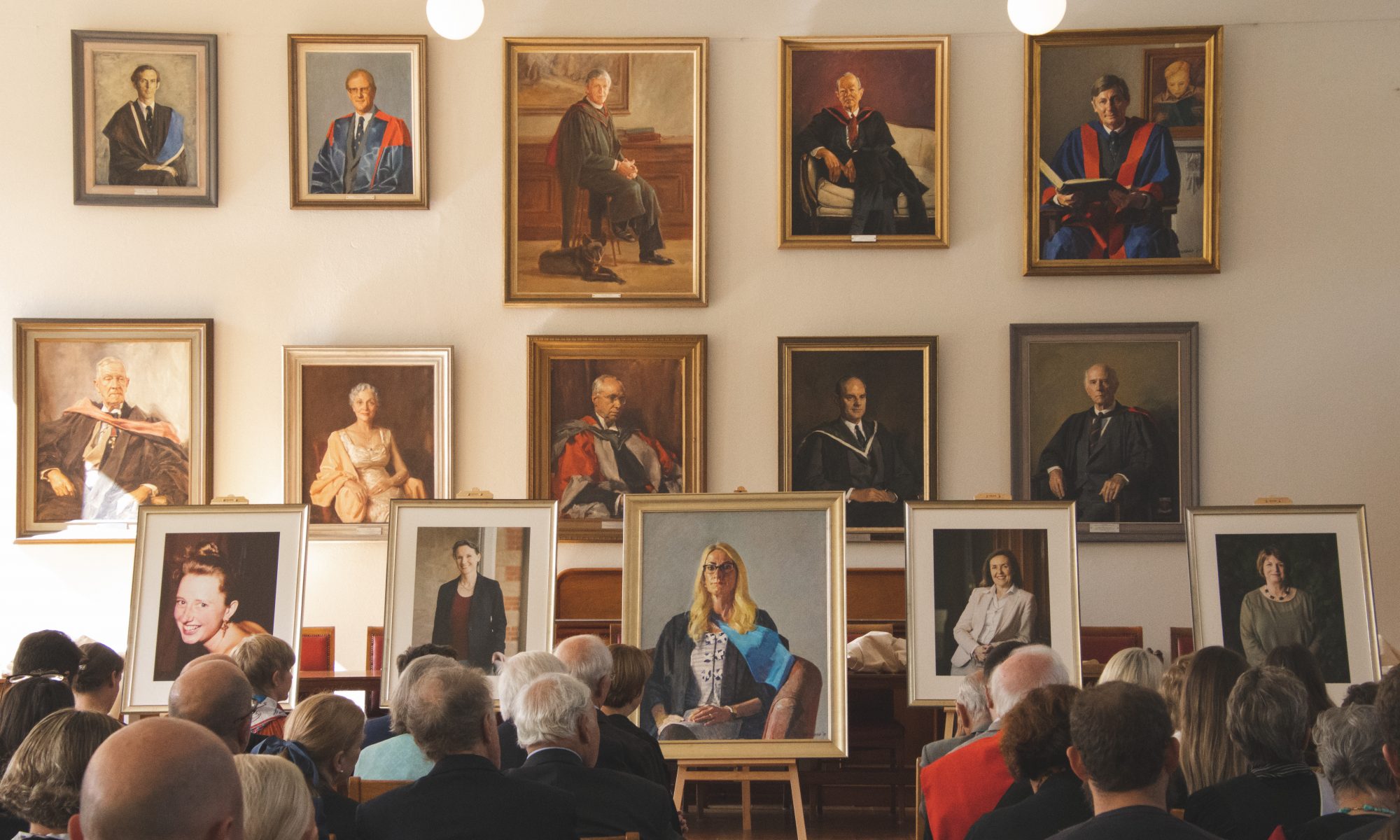 Photographic portraits of four St Mark’s women of influence – the late Georgia Blain, Dr Rachel Buxton, Dr Angela Evans AM, and Ms Linda Matthews – were unveiled on Founders’ Day (Sunday 2 May) following the unveiling of the portrait of the eighth Master, Ms Rose Alwyn, painted by the eminent portrait artist Robert Hannaford AM.

Speaking after the unveiling of her portrait, Rose Alwyn said: “As an alumnae of the College, as the second woman Dean and first woman Master, it is particularly gratifying to see the initiative of recognising the leadership and contribution of women of St Mark’s has now commenced, with the Board identifying some women of significance and recognising the hanging of such portraits as important symbols and artefacts.”

The four St Mark’s women whose photographic portraits were unveiled are:

The Head of College, Professor Don Markwell, said of them: “All are people of distinction and standing, of influence, and of significance for the College in diverse ways.

“Two are women of distinction from the very first year of St Mark’s women, 1982 – one of these (the late Georgia Blain) a prize-winning Australian novelist who has been recognised as a Distinguished Collegian, the other (Dr Angela Evans) a long-serving member of our governance bodies and Acting Chair of the College Board who has been honoured in the Order of Australia for her outstanding professional and community service work.

“Another of these photographs is of the first woman Chair of our College Board (Ms Linda Matthews), and another is of our first – and so far only – female Rhodes Scholar (Dr Rachel Buxton).

Professor Markwell said that in 2022 the College will mark the 40th anniversary of co-education, and this “landmark in our history … will give us the opportunity to recognise many others, many here today, who have been important in our journey in coeducation”.

Over 150 members and friends of the College were present for the unveiling and other Founders’ Day events on Sunday 2 May. These began with a service to honour St Mark, the Founders, and members of the College killed in World War II. At morning tea on the College Green, the traditional toast to the Founders was followed by a toast to thank Ian and Pamela Wall for their great generosity to the College (most recently funding the car park extension) and to mark Ian’s 90th Birthday.

Professor Markwell spoke of each of the four St Mark’s women in turn before their photographic portraits were unveiled. What follows is a slightly edited version of his remarks about each:

“The first photographic portrait is of the late Georgia Blain, who was last year officially recognised by the College Board as a Distinguished Collegian.

Born in 1964, Georgia Blain was a celebrated novelist and one of the first women to attend the College in 1982. Already a prize-winning poet when she entered St Mark’s, Georgia went on to be, in the words of one writer, ‘acclaimed as a novelist, short story writer and essayist who transformed the everyday into works of extraordinary beauty and clarity’.

After completing her Arts degree at the University of Adelaide, Georgia finished her Law degree at the University of Sydney.  Working first as a journalist and then as a copyright lawyer (who continued to write on copyright issues for many years), in the mid-1990s she turned to writing full-time, and her award-winning debut novel, Closed for Winter, set in seaside Adelaide, appeared in 1998.

Her several subsequent books include the novels Candelo (1999), The Blind Eye (2001), Names for Nothingness (2004), Too Close to Home (2011), and Between a Wolf and a Dog (2016), the young adult novels Darkwater (2010) and Special (2016), and the short story collection The Secret Lives of Men (2013). Her Births, Deaths and Marriages: True Tales (2008) was published as she undertook a PhD in creative writing at the University of Western Sydney, and she continued with other writing, including regular columns for The Saturday Paper, as she battled against brain cancer in 2015-16.

Several of Georgia’s books were shortlisted for major literary awards, and Between a Wolf and a Dog was awarded the 2017 Victorian Premier’s Literary Award for Fiction and the 2016 Queensland Literary Award for Fiction.  Closed for Winter was adapted for film in 2009, starring Natalie Imbruglia and filmed in Adelaide, and The Museum of Words: a memoir of language, writing, and mortality, was published posthumously in 2017.

On her death in December 2016, just days before the death of her mother, the journalist Anne Deveson, Georgia Blain was described by one obituarist as ‘one of Australia’s finest writers’. ‘There is’, the obituarist wrote, ‘no better way of remembering Georgia than reading her work.’

Georgia Blain is remembered at St Mark’s with warm admiration, as a Distinguished Collegian, and now with this photographic portrait of the young and vibrant Georgia Blain.

It is my privilege to invite Georgia Blain’s husband, Andrew Taylor, to unveil it, and then to say a few words.”

“Rachel Buxton was a C.A.S. Hawker Scholar at St Mark’s College in 1993-97, and served as College Club President in 1997, when she was also awarded the Collegians’ Prize. She graduated from the University of Adelaide in 1997 with First Class Honours in English Literature, and the University Medal.

Rhodes Scholar for South Australia for 1998, Rachel completed a Master’s and a Doctorate in Oxford in English language and literature. Her thesis on the influence of Robert Frost on Northern Irish poetry – a topic inspired by a suggestion from the then Master of St Mark’s College, Robin Ashwin – was later published by Oxford University Press.

As Senior Tutor at Merton, Rachel managed all academic-related activities in one of Oxford’s academically most successful colleges, and devoted considerable attention to supporting individual students in their academic and personal development.

Recalling the positive difference which St Mark’s made in her life, when she was appointed as Director of Learning, Rachel said that she was excited to take on this role at the College, seeing it as ‘a terrific opportunity to make a genuine difference at a critical stage in the lives of young people’.

She has been doing just this brilliantly and with such positive impact since starting here in February last year, and we are all very grateful.”

“As you know, Angela Evans was, like Georgia Blain, one of the very first women students to enter St Mark’s when it became coeducational in 1982. Angela was a resident student at St Mark’s from 1982 to 1984 while she studied podiatry at what is now the University of South Australia, from which she later earnt her PhD.

In 1983 and 1984, Angela served on the College Club Committee – in 1984, as Secretary. The Lion of 1984 recorded that she ‘undertook her position with great efficiency and style’ – qualities evident in everything that Angela undertakes, as is what The Lion in 1983 described as ‘her unsinkable optimism’.

Angela’s contribution to the College has been alongside outstanding professional contributions in the field of podiatry, with a focus on paediatrics and sports medicine, including as a clinician, a university teacher (including currently for La Trobe University), a much-published researcher, chair and other office-holder in various professional associations and regulatory bodies, and an NGO volunteer, most particularly with Walk for Life – Bangladesh, and the Clubfoot Aid Program.

The details of these and other contributions and significant professional recognition were spelt out in a strikingly impressive citation when, in 2019, Angela was appointed as a Member of the Order of Australia ‘for significant service to community health in the field of paediatric podiatry, and to professional standards’.

As well as to the College and to podiatry in various ways, Angela has also given service to the Anglican Church, including through her long-standing leadership roles next door at St Peter’s Cathedral, including as People’s Warden and Honorary Lay Canon, at St Barnabas Theological College, and at Anglicare, with which I am delighted to report she has worked with leaders of our student Charitable Foundation to create a very fitting bond.

The Founders of St Mark’s nearly a century ago believed that the College would encourage among its students what they described as ‘the ideal of service’. Angela Evans has quite outstandingly fulfilled the Founders’ ideal of service.”

“In August 2018, following a search and selection process, Linda Matthews was appointed as – and I quote from the announcement – ‘the new Independent Chair of St Mark’s’ – making her also the first female Chair of our College Board.

I can give personal testimony from my time at St Mark’s to the dedication, clarity of mind, shrewdness of judgement, wise and realistic counsel, and warmth and generosity of spirit which Linda has brought to this role, aiming always to do what is best for the students of this College, and upholding the values for which the College stands.

With her early years in Broken Hill and university education at Flinders University, Linda has also brought to her role at St Mark’s the experience and insights she had gained in, amongst various other roles, service for 14 years as South Australian Commissioner for Equal Opportunity from 1996 to 2010, as Queensland’s first Privacy Commissioner from 2010 to 2012, and as the Executive Director of Women NSW in the NSW Department of Families and Communities from 2012 to 2014.

Linda’s successor wrote: ‘On leaving, Linda was able to take pride in the fact that South Australia’s discrimination protections are more comprehensive than ever, although, as she would point out, there still remains work to be done.’

Linda has also held leadership roles in various not-for-profit organisations. These include serving as Board member and at times Chief Executive Officer of Catherine House, which supports women experiencing homelessness; as Board member of Adelaide Benevolent Society; and Chair of the disability organisation SCOSA. She has also held roles with such bodies as the Parks Community Legal Service, the SA Domestic Violence Prevention Unit, the SA Rape and Sexual Assault Service, and Survivors of Torture and Trauma Rehabilitation Services.

The announcement in 2018 of Linda’s appointment as Chair at St Mark’s said, and I quote: ‘The Interim Board and Council are delighted with the appointment of our new Chair whose strategic skills, clear vision, competence, and positive approach will lead the future directions of the College.’

In my view, from very close exposure, the hopes expressed in that statement have been more than amply fulfilled, and I for one am very grateful.”

Professor Markwell said that he believed that Rose Alwyn’s portrait hanging behind the High Table and the photographic portraits of four other St Mark’s women of influence also hanging in the Hall would all “adorn the Hall – powerful examples to current and future members of this College of what St Mark’s women can be”. 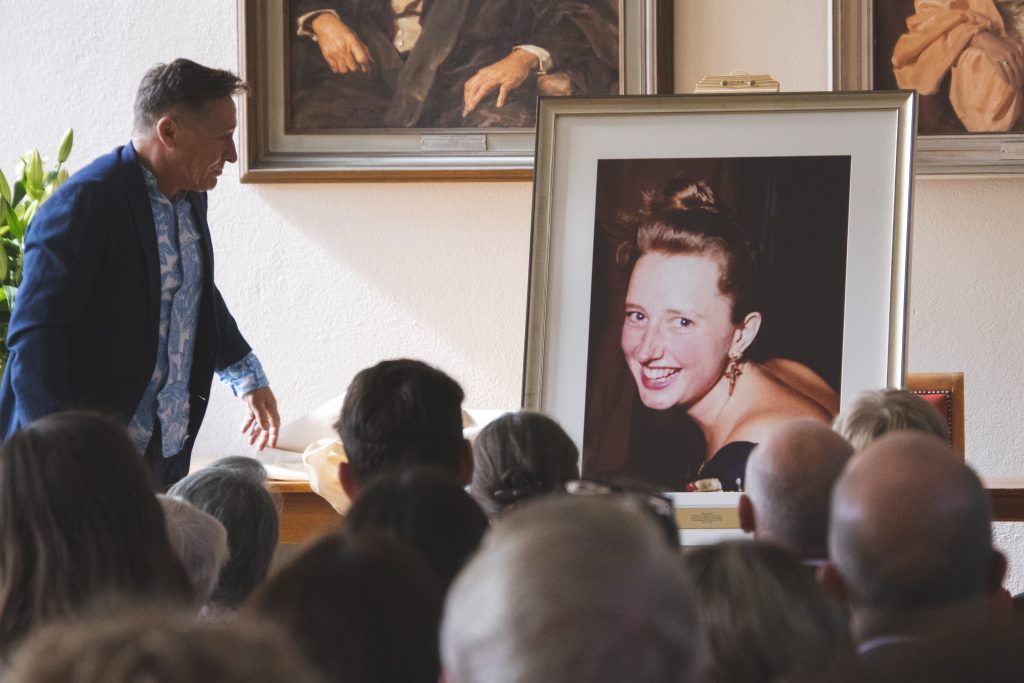 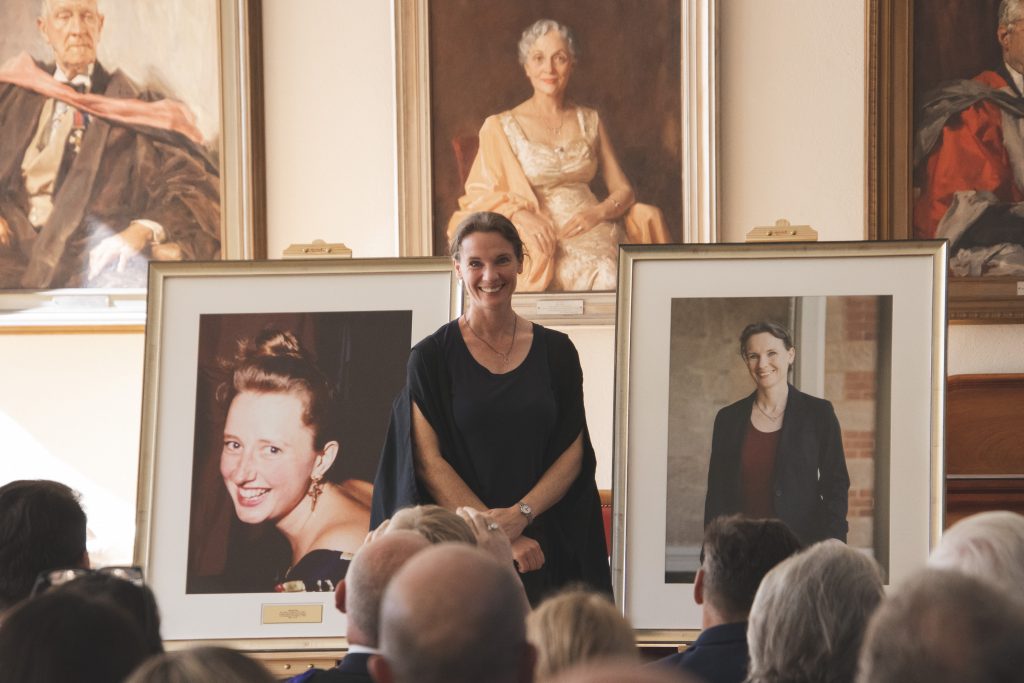 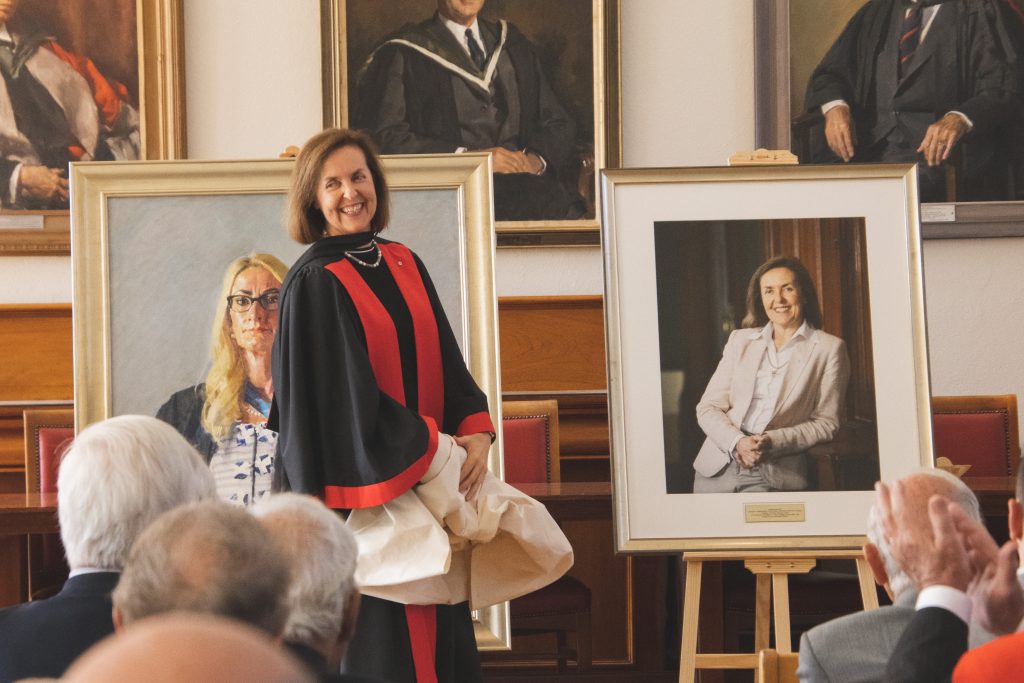 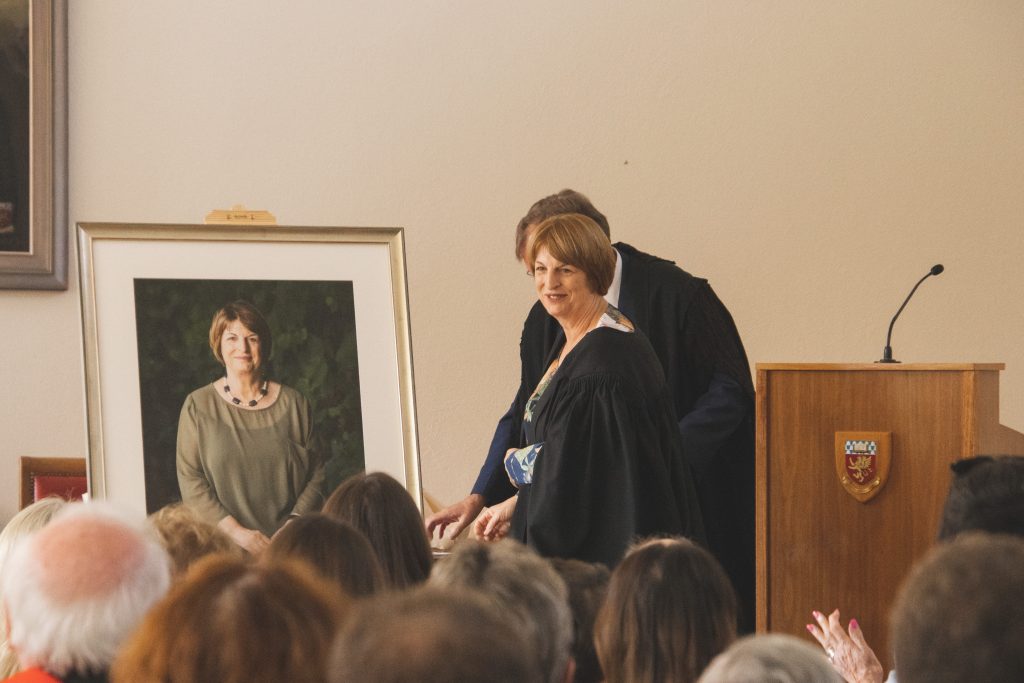