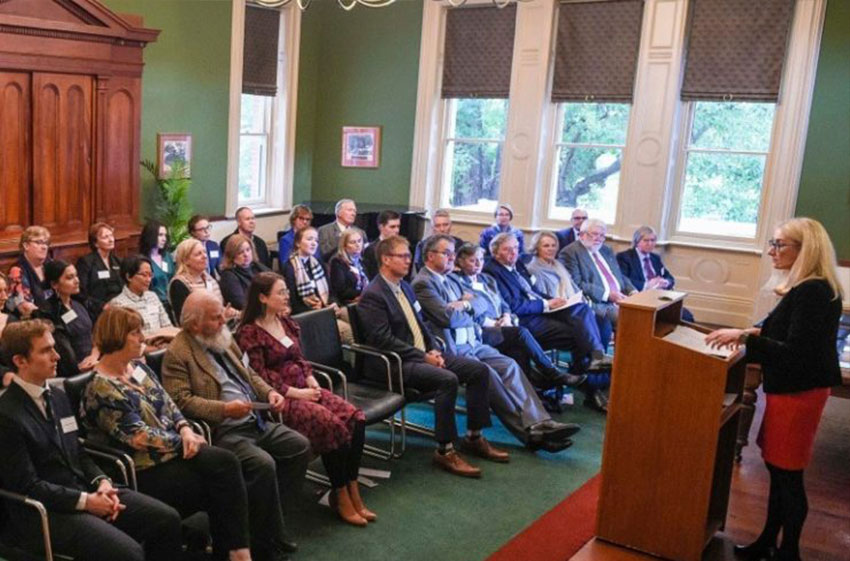 Dr Richard Harris SC OAM presented University of Adelaide students Sophie Ludbrook and Kaidy Morgan with their 2019 Charles Hawker Scholarship certificates at a ceremony held at St Mark’s College on Thursday. Sophie studied at Scotch College in Adelaide and is from Mylor in the Adelaide Hills. Kaidy completed her year 12 studies at St Joseph’s College in Port Lincoln and grew up on her family farm at Coulta.

Both Sophie and Kaidy are in residence at St Mark’s College and studying at the University of Adelaide. Sophie is enrolled in the Bachelor of Medicine and Bachelor of Surgery degrees and Kaidy was DUX and School Captain and is studying a Bachelor of Agricultural Science degree.

2019 Australians of the Year Dr Richard Harris SC OAM and Dr Craig Challen SC OAM were recognised for their heroic efforts as part of an international rescue mission to save 12 boys from flooded caves in Thailand last year.

Dr Harris presented four new Charles Hawker Scholars with their scholarship certificates this afternoon at a ceremony at St Mark’s College in Adelaide.

Mrs Lilias Needham established the Charles Hawker Scholarship in memory of her brother Charles Allan Seymour Hawker. Today, each of these residential scholarships is valued at up to $60,000.00 over three years. It is one of the most generous privately funded scholarships available to undergraduate and postgraduate students in Australia.

Since 1990, the Trustees have awarded more than six million dollars to 127 young Australians. The four successful 2019 candidates were awarded Hawker Scholarships from an Australia wide field of 140 applicants.

“I warmly congratulate the 2019 scholars.  Each of them has already displayed a strong commitment to the splendid ideals upon which the Charles Hawker Scholarship Memorial Trust Fund is founded. They are a talented group of young Australian scholars with a social conscious and an inquiring mind. I wish them well in their studies. I commend the Trustees for the significant contribution the scholarship continues to make to the education of an increasing number of young Australians,” Dr Richard Harris SC OAM said.

There are a number of scholarships awarded each year. The Trustees offer them to capable students of principle and character, who are committed to Australia’s future. The Charles Hawker Scholarship perpetuates the memory and commemorates the achievements of one of Australia’s most respected pastoral pioneers. Born on May 16th 1894 at Bungaree homestead near Clare in South Australia, Charles Hawker was educated at Geelong Church of England Grammar School and Trinity College, Cambridge. Student, soldier, pastoralist and statesman Charles Allan Seymour Hawker died in the Kyeema air disaster on October 25th, 1938.

Undergraduate and postgraduate Hawker Scholars are able to attend a range of educational institutions. These include the Australian National, Adelaide, Flinders, South Australia and New England Universities and Marcus Oldham College. Postgraduate Charles Hawker Scholars are also able to follow in Charles Hawker’s footsteps by studying at the University of Cambridge UK.

Charles Hawker had a lasting impact on Australian politics and all members of the federal house had an enormous respect for him during his time as Australia’s first Minister for Commerce in the Lyons government in the 1930s.

Scholarship selection is based on personal qualities as well as academic ability. Applications for the 2020 Charles Hawker Scholarships open on December 9th 2019 and close on January 8th 2020.  An application form and further information is available from www.hawkerscholarship.org or by contacting the secretary to the Trustees on 08 8127 1654.

Sophie Ludbrook and family with Australian of the Year, Richard Harris SC OAM

The two other 2019 Charles Hawker Scholarship recipients are Yasmin Poole from Victoria and Finnegan Rowbottam from WA and are in residence at Burgmann College and studying Law and International Studies at the ANU.

Charles Hawker presented the College with a painting of C.A.S Hawker